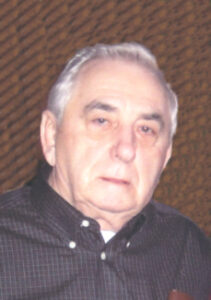 Stanley L. Wojcik, 85, a longtime resident of the Donaldson area passed away at 12:40 p.m. Thursday, September 13, 2012 in the Catherine Kasper Life Center, Donaldson.
A native of Donaldson, Stan was born the son of Polish immigrants, George F. and Mary (Skalka) Wojcik at the family home. He graduated from West High School in 1945. Stan then entered the U.S. Marine Corps and served until the end of WWII.
In July of 1949 he married the former Loraine E. Myszka in Chicago, Illinois. They made their home in the Calumet City area. There he became a devoted Cubs fan.
Stan was a union electrician and a proud member of the Chicago Electrical Union No. 134 for over 30 years. He worked on projects like McCormick Place and Inland Steel but mostly residential. The couple decided to return to Donaldson and built their own home on a parcel of the family homestead where they have called home for the past 30 years.
A member of St. Michael Roman Catholic Church in Plymouth, Stan also holds membership in the Knights of Columbus Council No. 1975 and the American Legion Post 330 at Calumet City.
He is survived by his wife of 63 years, Loraine and their son, Ed and his wife Peggy Wojcik of Orland Park, Illinois. A grandson, James M. Wojcik of Orland Park and a granddaughter, Michelle (John) Quintas of Batavia, IL survive as well with one great-granddaughter Juliette Mae Wojcik.
Of his eleven siblings, three survive; Al (Rita) Wojcik of Donaldson, Mary (Chuck) Witz and Rose Ringer of Plymouth along with many nieces and nephews.
He was preceded in death by siblings; Anna Barnas, Frank Hajdusiewicz, Walter Hajdusiewicz, Ed Wojcik, Joseph Wojcik, Stella Kulkalski, Helen Bradtke and John Wojcik.
Family and friends will gather at the Johnson-Danielson Funeral Home, 1100 N. Michigan St. in Plymouth, on Sunday, September 16th from 2 – 6 p.m. A Rosary will be prayed at 6 p.m. in the funeral home.
A Mass of Christian Burial will take place at 11 a.m. EDT on Monday, September 17th in the St. Michael Catholic Church, 613 N. Center Street, Plymouth with celebrant Rev. William Kummer. Burial will follow in the New Oakhill Cemetery, Plymouth with Military Honors accorded him by members of the Plymouth American Legion Post 27, Veterans of Foreign Wars – Marshall County Post 1162, the D.A.V. and South Bend Honor Guard.
Memorial gifts may be made to St. Michael Catholic Church, 612 N. Walnut Street, Plymouth, IN 46563