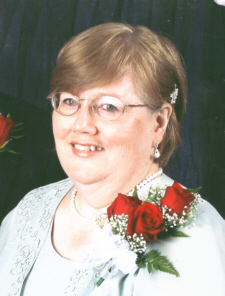 Stella K. Riffel, 54, an Argos resident for the past fourteen years, died at 7:12 a.m. from injuries sustained in an automobile accident on U.S. 31 at 19th Road on Tuesday morning, January 22, 2008.
Born in Wainwright, Alberta, Canada, on November 19, 1953, Stella was the daughter of Fred and Doris Ford Younker.
She graduated from high school in Canada and then attended the Prairie Bible Institute in Alberta, Canada.
On July 10, 1976, in Alberta, she became the bride of Terry Riffel.
Stella worked in the Wal-Mart Pharmacy in Plymouth.
Her interests were centered around the Bible and her family.
She was a member of the Grace Baptist Church.
In addition to Terry, her husband of 31 years, Stella is survived by five sons and daughters-in-law and five grandchildren.
They are: Leigh and Angela Riffel and their children, Luke and Emily, all of Pensacola, Florida: David and Sarai Riffel, Conyers, Georgia: Stephen and Charity Riffel and their children, Michael and KatieLynn Riffel, all of Pensacola, Florida: Matthew and Stephanie Riffel and their son, Aiden Riffel, all of Plymouth, Indiana and Michael and April Riffel, also of Plymouth, Indiana.
Doris Younker, Stella’s mother, living in Alberta, Canada, also survives, together with three sisters and four brothers. They are: Lillian and Allain Dumas, Quebec: Dorothy and Ron Brassington: Janet and Don McKimmon: George and Lloy Younker, Harvey and Val Younker, Francis Younker, and Gordon and Linda Younker, all of Alberta, Canada.
Many nieces and nephews also survive.
Stella was preceded in death by her father, Fred Younker, and her sister-in-law, Fran Younker.
Friends are invited to share memories and celebrate the life of Stella Riffel at the Grace Baptist Church, 1830 N. Michigan St., Plymouth on Friday, January 25, 2008, from 1 to 3 p.m. and on Saturday, January 26, 2008, for one hour prior to the funeral services at the church at 2 p.m.. Rev. Matt Elliott, pastor of the church, will officiate
Interment will be in the Jordon Cemetery, Argos.
The Johnson-Danielson Funeral Home, 1100 N. Michigan St., Plymouth, is assisting the family with arrangements.
Memorial gifts in Stella’s name may be made to the Grace Baptist Church.