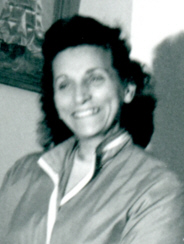 Stella M. DeMatteo, 95, a Marshall county resident since 1988, passed away Monday morning on February 23, 2015 at Miller’s Merry Manor in Culver.
Born in Chicago, Illinois on September 8, 1919, Stella was the daughter of Charles and Frances Salamone. She attended McKinley Grade School.
On September 20, 1941 in Harvey, Illinois Stella married Jasper DeMatteo. He would precede her in death on December 8, 1973.
A woman that worked through the Great Depression, Stella was a driven, caring woman. She was a wonderful wife and mother, and stayed at home to take care of her two boys, Chuck and John, until they were in school. She then worked for Ben Franklin in Illinois for five years and also as a part-time clerk at Montgomery Ward for 8 years in the 50’s and 60’s.
Stella enjoyed sewing, working in her garden, traveling and cooking. She treasured family events and any time spent with her family.
She is survived by her sons, Chuck A. (Shirley) DeMatteo of Culver and John A. (Kayrn) DeMatteo of Weyerhaeuser, WI, along with 4 grandchildren and 3 great-grandchildren. Her siblings are Florence Plummer of Riverside, CA, Rose Howe of Beecher, IL, Sylvester (Julie) Salamone of Beloit, WI, and Sam (Patricia) Salamone of Riverside, CA.
She was preceded in death by her husband, parents, twin grandsons, Anthony and Ryan, and siblings: Nina LaPat, Joseph, Carl and Charles Salamone.
A private burial will be in the St. Michael Catholic Cemetery.