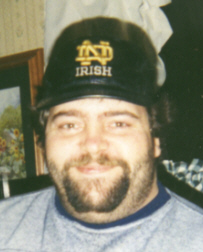 Stephan H. Gonce, Jr., 45, a lifetime Plymouth resident, died at 3:05 p.m. on Monday, February 18, 2013 in Saint Joseph Regional Medical Center, Plymouth, following an extended illness.
The son of Stephen H. and DiAnne King Gonce, Sr., Steve was born on February 3, 1968 in Plymouth. He was a 1986 graduate of Plymouth High School.
On July 16, 1994, Steve married his wife, Melinda, in their back yard.
Steve had been employed at Flexible Technologies for 17 years, until his illness.
A loving father, husband and grandfather, Steve enjoyed sports, he was a fan of the Steelers, Notre Dame football and coached softball. He also enjoyed fishing, flying model airplanes, dirtbike racing, tinkering in his garage and going on motorcycle rides. Steve is survived by his wife, Melinda of Plymouth; his daughter, Amanda Gonce of Argos; three grandchildren: Dustin, Zachery and Parker; a sister, Jamie J. Gonce of Noblesville; two brothers: Abree S. (Jodi) Gonce and their children Monet and Ava of Plymouth and Aaron T. (Gary Stephens) Gonce of Noblesville; Troy’s children Ashley and Garrett Gonce and numerous nieces and nephews.
He was preceded in death by his parents; a brother, Troy Gonce in 2011 and his grandparents.
The family will receive friends at the Johnson-Danielson Funeral Home, 1100 N. Michigan St., Plymouth, on Saturday, February 23, 2013 from 11:00 a.m. to 1:00 p.m. Funeral services will be held in the funeral home immediately following visitation at 1:00 p.m. on Saturday.
Burial will be in new Oakhill Cemetery, Plymouth.