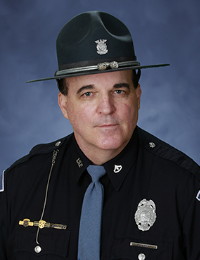 Master Trooper Stephen Eric Fulk, 57, of Valparaiso, Indiana passed away at his home on Friday November 16, 2018. Stephen was born on December 21, 1960 to Paul and Joan Wappes Fulk in Columbia City, Indiana.
He graduated from East Noble High School in Kendallville, Indiana in 1978.
He married Deborah Gallaway on May of 1986 in Albion, Indiana. He graduated from the Indiana State Police Academy on December 19, 1987 and has been with the Indiana State Police for the last 31 years. He spent his entire career assigned to the Indiana Toll Road.
He was a devout Alabama Football fan and worked many Notre Dame football games over the years. He also enjoyed being outdoors.
Survivors include his wife Deborah Fulk of Valparaiso, Indiana and one son Michael Fulk of Carmel, Indiana. He is also survived by his in-laws, Thomas and Sherry Benedict of Plymouth, Indiana.
Visitation for Stephen will be held on Friday November 23, 2018 from 5:00 to 8:00 P.M. at the Johnson-Danielson Funeral Home 1100 N. Michigan Street, Plymouth. Funeral services will be held on Saturday November 24, 2018 at the Johnson-Danielson Funeral Home at 10:00 A.M. with Indiana State Police Chaplin Fr. Daniel Coffey officiating. Interment will take place at New Oak Hill Cemetery, Plymouth.
Memorials may be directed to the American Diabetes Association at www.diabetes.org