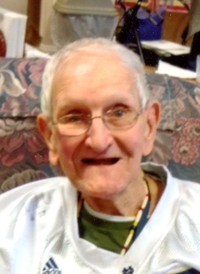 Stephen E. Vician, 85, of Plymouth, passed away Friday, September 22, 2017 in the Cardinal Nursing and Rehabilitation â€“ South Bend.
He was born in Angola, Indiana on October 9, 1931.
On November 4, 1967, in Lake County, Indiana, Stephen and Louise Bean; she preceded him in death on May 10, 2009.
Stephen served in the United States Army and was honorably discharged in 1953.
He worked for the Post Office in Gary, Indiana from 1954 to 1971. After the Post Office, Stephen worked for the City of Plymouth for several years. He was an active member of the Calvary Evangelical Lutheran Church. He was an outdoorsman who enjoyed fishing, riding his bike and walking.
Surviving are his children; Julia L. Vician of Warsaw, John A. Vician of Plainfield, Joel R. Vician (Christy Sauer) both of Koontz Lake. Also surviving are three grandchildren; Tabitha, Andrew and Kyle, three great-grandchildren; Jacob, Peyton and Isabelle, and a brother; Edwin Vician of Brownsburg.
He was preceded in death by his parents, wife, son; James W. Vician, and a brother; Lawrence â€œLarryâ€ Vician.
Visitation will be from 9-10 AM on Wednesday, 27, 2017, in the Calvary Evangelical Lutheran Church, 1314 North Michigan Street, Plymouth. Funeral services will immediately follow at 10:00 AM with Pastor Eric Ahlemeyer officiating.
Burial will follow in the New Oak Hill Cemetery with Military Honors provided by members of the American Legion Post 27, Veterans of Foreign War- Marshall County Post 1162 and Disabled American Veteran Chapter 42.
Memorial contributions may be directed to Calvary Evangelical Lutheran Church.