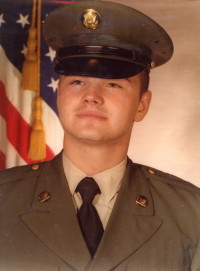 Stephen Patrick, 59, passed away Saturday morning on June 13, 2020 at St. Joseph Regional Hospital in Mishawaka.
Born in Knox, Indiana on September 4, 1960, Stephen was the son of Luther and Mildred (Allen) Patrick. He met the love of his life Carrie at the age of 15, and they were married on September 10, 1978 in her parent’s front yard. Stephen proudly served his country in the Army. He attended Lawton High School in Lawton, Oklahoma while serving his country and received his diploma in 1981.
After being honorably discharged, he attended Andersonville Baptist Theological Seminary in Camilla, Georgia, obtaining his Associate’s Degree in Ministry.
Stephen and Carrie served as The House of the Lord Church lead Pastors for 30 years.
Having a true Pastor’s heart, he loved pouring his heart into the ministry at the church. However, in his spare time from serving the congregation, Stephen loved to spend time gardening vegetables, spending time with his family on vacations, and spoiling his grandchildren.
Surviving him is his wife of forty one years, Carrie (Hite) Patrick; three sons, Michael (Kristel) Patrick of Plymouth; Joshua (Brittney) Patrick of Plymouth; and Taylor Patrick of Argos, IN; daughter Kristi (Doug) Deon of Plymouth; four sisters, Candi (Terry) Norris of New Paris, IN; Mary (Tony) Goheen of Winamac, IN; Barbara (Rick) VanWynsberghe of Rolling Prairie, IN; and Janice (Greg) Howdeshell of Rochester, IN; brothers Jerry (Martie) Patrick of Knox, IN and Luther Patrick of Mishawaka, IN; eleven grandchildren and one great-grandchild.
He is preceded in death by his parents: Luther and Mildred Patrick, and his brother David Patrick.
Visitation will be held on Friday June 19, 2020 from 4 p.m. to 6 p.m. at the House of the Lord Christian Church, 16493 Lincoln Hwy, Plymouth, Indiana 46563. A funeral service will immediately follow with Pastor Danny Hess officiating.
A private graveside service will be held at the cemetery on June 20, 2020 with military honors rendered by the Army Funeral Honor Guard
Memorial contributions can be made to the House of the Lord Food Bank or the House of the Lord Youth Ministry, 16493 Lincoln Hwy, Plymouth, Indiana 46563.