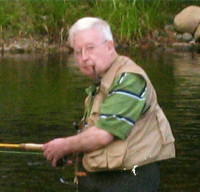 Sterling P. â€œPeterâ€ Davis, 81, passed away in his home on Friday morning November 23, 2018.
Born in Binghamton, New York on February 1, 1937, Peter was the only child born to Sterling and Helen A. (Powers) Davis. He graduated from Binghamton High School. Peter went on to graduate with his Bachelors Degree in Philosophy from Hamilton College in Clinton, New York, on a full-ride academic scholarship.
Peter served our country in the U.S. Marines as a Reserve until his Honorable Discharge.
Before technology was what it is today, Peter was an educational textbook salesman. He then later became a soft-ware developer of educational school software until his retirement in 2008. Peter was proud to be the youngest member of the Million Dollar Club for Harcourd Brace Inc.
Born and raised in upstate New York, that is where his love always came back to. He enjoyed trout fishing and fly fishing at Beaver Kill in New York. Peter was an avid organic gardener, and in his later years, began woodworking and harvesting trees on his own property.
Peter is survived by his sons, Sterling Peter (Maureen) Davis III of Elkton, MD and Robert Guy (Jinnifer) Davis of Rockford, MI; three grandchildren Robert, Ana and Gabriela; and his sonâ€™s mother, Theresa Davis.
He was preceded in death by his parents.
Visitation will be held from 3-5 p.m. on Friday, November 30, 2018 in the Johnson-Danielson Funeral Home, 1100 N. Michigan Street, Plymouth. Funeral services will follow at 5 p.m. with Fr. John Korcsmar C.S.C officiating.
Burial will be at a later date in the Pine Grove Cemetery in Deposit, New York with his parents.
Peterâ€™s sons would like to say thank you to his caregivers, Kelly, Dusty and Vickie, who gave their father over 8 years of love and care when they were not able to be close.
Memorial contributions can be made to The Michael J. Fox Foundation for Parkinson’s Research,
Grand Central Station, P.O. Box 4777, New York, NY 10163-4777.