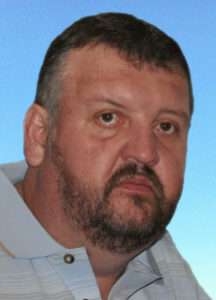 Steven D. Eckard, 47, a Plymouth resident since 1990, passed away at 3:42 p.m. on Tuesday, December 4, 2012 from sudden illness. The son of the late Roy Lee Eckard and June A. Borror Palmer, Steve was born on July 3, 1965 in Harrisonburg, VA. He graduated from Franklin High School in West Virginia.
Steven and Diane Figg were married on March 6, 1992.
Steven was a business owner, operating several businesses – S&S Tree & Lawn, which included snow removal, sweeping and landscaping, S&S Limo Services, both in Plymouth, and the Argos Bar & Grill.
He was an avid sports fan, no other team allowed but the Pittsburg Steeler’s and NASCAR driver Bill Elliott. He also enjoyed hunting and fishing and collected cars. His favorite hobby was spoiling his daughter and grandchildren.
Steven is survived by his mother, June Palmer of Cromwell, Indiana; a daughter, Stephanie Kerneda Eckard of Plymouth; his former wife, Diane Kehr of Plymouth; two step-sons: Josh Snyder of San Antonio, TX and Aaron (Danielle) Snyder, a BM1 in the United States Navy, stationed in Hawaii; two step-daughters: Sarah (Andy) Perschbacher of Plymouth and Rachel (Lincoln) Parish of South Bend; four grandchildren: Victoria “Honey Bunny” Perschbacher, Miles Perschbacher, Jude Parish and Landon Snyder; two sisters: Lori (Keith) Grogg of Bridgewater, VA and Crystal (Paul) Cook of Dayton, VA and two brothers: Charles “Chuck” Eckard of Cromwell, IN and Roy Lee Eckard, Jr. of Austin, TX.
He was preceded in death by his father.
Friends may visit with Steven’s family on Thursday, December 6, 2012 from 6 to 8 p.m. at the Johnson-Danielson Funeral Home, 1100 N. Michigan St., Plymouth, IN.
Funeral services will be held in the funeral home at 11:00 a.m. on Friday, December 7, 2012.
Burial will be in Maple Grove Cemetery, Argos, IN.
Memorial contributions may be made to Riley Children’s Hospital 705 Riley Hospital Dr. Indianapolis, IN 46202 or the American Cancer Society P.O. Box 22718 Oklahoma City, OK 73123-1718.