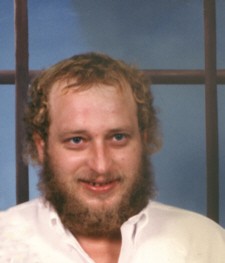 Steven Wayne Booker, 46, died unexpectedly of apparent natural causes,at 3:04 p.m. on Friday, February 16, 2007, at his Garden Court residence, 400 W. Washington St. He was a former Benton Harbor, Michigan resident, for many years.
Born in Bremen on April 6, 1961, Steve is the son of Robert J. and Dorothy M. (Early) Booker and attended Benton Harbor Community schools.
On October 21, 1989 he married Wendy K. Chmielewski in Plymouth.
He was a fiberglass fabricator for several area businesses as well as a roofing contractor.
Steve, above all, loved his children and talked of them often. He was an outdoor sportsman and enjoyed all sorts of activities, especially hunting and fishing until he became disabled. He had a great sense of humor and was proud of his numerous tattoos.
Steve had attended the Plymouth Open Bible Church.
He is survived by his mother; Dorothy M. Pope of Plymouth, his former spouse and by his four children: two daughters and two sons.
His daughters are Kayla Nicole Booker and Kristen Michelle Booker. His sons are Steven W. Booker, Jr. and Brandon Michael Booker all of Plymouth.
Also surviving is a dear brother, Robert Michael Booker, Sawyer, Michigan and sister and brother-in-law, Cynthia K. and Harold Tabor of Plymouth.
Several nieces and nephews and a special friend, Crystal Brink of Plymouth, survive as well.
Steve was preceded in death by his father, a step-father; Carl D. Pope, his grandparents and several aunts and uncles.
Services will be held at a later date.
Interment will be in Graceland Cemetery, Bridgman, Michigan.
Memorial gifts in Steve’s name may be made to the Open Bible Church, 1007 W. Madison Street, Plymouth, IN 46563.