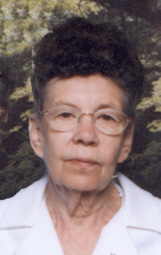 Susie Sellers, 79, of 1211 N. Center St., Plymouth, a resident there for the past 56 years, died, following an illness, at 5:50 p.m. on Monday, April 19, 2010, at her residence surrounded by the love and care of her devoted family.
Born on June 20, 1930, in McLaughlin County, Kentucky, she was the daughter of Homer and Offa (McCarty) Patrick. There she was raised and attended school.
On November 19, 1949, in Knox, IN., Susie and Robert A. Sellers were married.
She worked for four years at Plymouth’s Parkview Hospital as a house keeping supervisor, but was primarily a content homemaker for her husband and children.
She loved Gospel music and a good cup of coffee. Her grandchildren were the loves of her life and she enjoyed traveling and collecting dolls and souvenirs. She collected pink Depression glass and was also a quilter.
Susie was a member of the Gospel Lighthouse for over 40 years.
She is survived by her loving husband, Robert, and their three daughters and a son. They are Della (Dan) Creighbaum, John (Dawn) Sellers, Nancy M. (Kevin) Sellers and Cathy A. (Roger Jr.) Mullins, all of Plymouth.
Twelve grandchildren and 12 great-grandchildren also survive together with six brothers and a sister. Several nieces and nephews survive as well.
Susie was preceded in death by a brother, three sisters and a grandson; Isaiah.
Friends may call on Thursday, April 22, 2010, from 4 to 8 p.m. at the Johnson-Danielson Funeral Home, 1100 N. Michigan St., Plymouth. Funeral services will be held on Friday, April 23, 2010, at 2 p.m. in the funeral home.
The Rev. Herb Hiatt, pastor of Plymouth’s Church of the Heartland will officiate.
Burial will follow in New Oakhill Cemetery, Plymouth.
Memorial gifts may be made in Susie’s name to The Center For Hospice and Palliative Care, 112 S. Center St., Plymouth, IN 46563 or the American Cancer Fund.