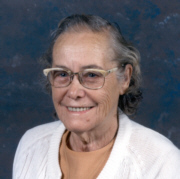 Sylvia F. Cummins, 88, of 905 Berkley St., Plymouth, died of natural causes in Pilgrim Manor at 9:25 p.m. on Thursday, October 30, 2003.
Sylvia was born in Texas County, Mo., on June 18, 1915. She was the daughter of Aaron and Sarah Ogle Brannam. She attended Missouri schools.
On Christmas Eve, December 24, 1934, in Houston, Mo., she and Harry B. Cummins were married. Harry died on October 7, 1986.
Sylvia worked in the housekeeping department of Parkview Hospital for over 15 years, retiring in 1980.
A woman of a number of interests, she loved to read and was an accomplished quilter. She enjoyed traveling and camping and was very fond of the ocean, visiting as often as she could.
A devoted member of the House of the Lord Church, Sylvia was known for her delicious pies available at church bake sales and suppers.
Sylvia is survived by eight children: four daughters and four sons and their families that include 33 grandchildren; 68 great-grandchildren and 16 great-great-grandchildren.
Her daughters are Clara Winters, Rochester, Ind.; Wanda Heliene, Terre Haute, Ind.; Linda and Glenn Anders and Jean and Paul E. Graham, all of Plymouth, Ind.
Her sons are Jack Cummins, Bourbon, Ind.; Roy Cummins, Mishawaka, Ind.; Jim and Loraine Cummins, Plymouth, Ind.; and Steve and Carol Cummins, Etna Green, Ind.
Sylvia has been preceded in death by her parents and her husband. Two sisters, Grace Ice and Goldie Rogers have also died as have three brothers, Otto and Virgil Brannam and an infant sibling. One grandchild and three great-grandchildren have also preceded her in death.
Friends and family will be welcomed to celebrate Sylvia’s life at the Johnson-Danielson Funeral Home, 1100 N. Michigan St., Plymouth, on Monday, November 3, 2003, from 4 to 8 p.m.
Funeral services, conducted by the Rev. Steven Patrick, pastor of House of the Lord Church, will be on Tuesday, November 4, 2003, at 11 a.m. in the funeral home. Burial will be in New Oakhill Cemetery, Plymouth.
Memorial gifts in Sylvia’s memory may be made to a charity of the donor’s choice.