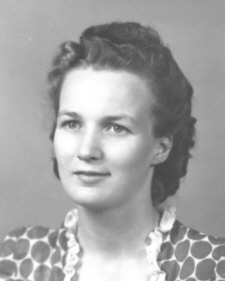 Sylvia Irene Myers, 94, has gone to be with her Lord on the morning of Friday, July 17, 2009.
Sylvia was born on September 13, 1914 in Culver, Indiana to Alvin B. and Bertha (Fry) Polley.
On September 17th, 1931, Sylvia and Donald E. Myers of Culver were united in marriage in Leiters Ford, Indiana. They had 72 wonderful years together when Don passed away on January 22, 2003.
Sylvia is survived by her three daughters and extended familes: Joyce and Max Parsons of North Liberty, Janet Bixel of Argos, and Judith and George Brown of Winona Lake. Eleven grandchildren, thirty-two great grandchildren and nine great-great grandchildren also survive. An infant daughter Betty Jean has also preceded her in death along with her spouse, three brothers and four sisters.
Sylvia’s first love was caring for her husband and daughters. Her devotion to God and her work in the Church of God were the most fulfilling times in her life as she lived by the following quote: “To be used by God is one of the most rare and richest blessings of mankind”.
Sylvia also loved God’s beautiful landscape and after her family was grown, she returned to school to study landscaping and gardening.
During WWII Sylvia was one of the first ladies to work in a factory. She ground crystals for aircraft at John Meck Industries in Plymouth. Friends are invited to join the family in celebration of this Christian woman’s life on Sunday, July 19th from 4 – 6 p.m. in the Johnson-Danielson Funeral Home, 1100 N. Michigan St., Plymouth where services will be held on Monday at 11 a.m. in the funeral home with calling one hour prior to services. The Rev. Steven Cunnington, pastor of the Beaver Creek Wesleyan Church will preside.
Burial will follow in the New Oakhill Cemetery, Plymouth.
Memorial gifts may be made to the Beaver Creek Wesleyan Church, 66027 Redwood Road, North Liberty, Indiana 46554.