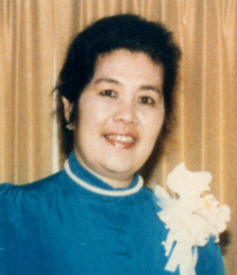 Teofila B. DeJesus, 86, formerly of Plymouth, passed away at 12:27 p.m. on August 26, 2014 in Rainbow Ark Hospice, Park Ridge, IL.
Born the eleventh child of Timoteo and Susana (Aben) Braganza, Teofila was born on May 19, 1928 in Panagasinan, Philippines. She graduated from the University of the Philippines with her Bachelor’s in Nursing in 1951. After moving to the United States, she attended Wayne State University in Michigan where she attained her Bachelors of Science and Nursing Degree in 1955 and furthered herself to get her Masters of Science and Nursing Degree in 1958.
Teofila married Jose R. DeJesus M.D. in Detroit, Michigan, and to this union four daughters were born: Liza, Mary Jane, Consolacion and Susana.
Teofila worked as a nursing instructor at the Henry Ford Hospital and Grace Hospital Schools of Nursing in Detroit in the 1950s. The couple moved back to the Philippines in 1962, where she became the Dean of the College of Nursing at Manila Central University. Returning to the U.S., Teofila managed the office of her husband, Dr. DeJesus, and helped establish a clinic in cardiology and internal medicine that they ran from 1969 until their retirement in 1998.
She was very involved in the Philippine Nursing Alumni Association International, contributing articles for publishing in their programs and newsletters. She was also the class coordinator for the class of 1951 when they celebrated their 55th jubilee nursing reunion.
Teofila enjoyed scrapbooking and collecting family photographs. She enjoyed gardening and was a great fan of Notre Dame Football. The family’s favorite vacation spot was Niagara Falls in Canada, where they visited very often during summer vacations. But above all, she was a devoted grandmother and cherished moments spent with her family.
She is survived by her children: Liza B. DeJesus of Illinois, Consolacion B. DeJesus of California, Mary Jane B. (Gerard) Russell of Illinois and their children, Kathleen C., Isabella D. and Joseph G. Russell. Also surviving is her sister, Rosie Taoatao of California.
Teofila was preceded in death by her parents, her husband, Dr. Jose DeJesus, her daughter, Susana Braganza DeJesus, and her nine siblings.
Visitation with the family will be from 5 to 8 p.m. EDT on Friday, August 29, 2014 in the Johnson-Danielson Funeral Home, 1100 N. Michigan Street, Plymouth. A Rosary service will be held at 7:30 p.m. The Mass of Christian Burial will be in St. Michael’s Catholic Church 625 N. Center Street, Plymouth, of which she was a member, On Saturday, August 30, 2014 at 11:00 a.m. EDT with Fr. John Korcsmar C.S.C. officiating.
Burial will be in New Oakhill Cemetery.
Memorial contributions can be made to the American Cancer Association, PO Box 22718 Oklahoma City, Oklahoma, 73123-1718, the American Heart Association 208 S. LaSalle Suite 900, Chicago, IL 60604, or to St. Michael’s Church, 612 N. Walnut Street, Plymouth, IN 46563.