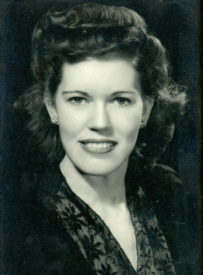 Thelma I. Pasley, 96, of 638 Windmill Dr., formerly of East Garro Street, passed away of natural causes at the St. Joseph Regional Medical Center- Plymouth Campus, at 4:36 a.m. on Monday, September 1, 2014.
Born in Steubenville, Ohio on January 27, 1918, Thelma was the daughter of Sinclair and Lucy Mae (Marsh) Boyd. She graduated from Culver High School with the class of 1936.
While working at the Culver Inn, she met a young man who had come to town working on the new water tower, they fell in love and on March 23, 1941 she married John L. Pasley Sr. He soon left for the service but returned safely and they began a family. Thelma worked for Meck’s, which became Wagner Wire, then Harvey Mart and retired from the Plymouth Public Library.
In her early years, she loved to dance, travel and take bus trips. Thelma is a former member of the Eagles, the Women of the Moose, and American Legion Auxiliary. She enjoyed attending her grand and great-grandchildren’s activities and events and playing cards.
Thelma is survived by her son, John (Deb) Pasley Jr. of Plymouth and their children, John M. (Susan) Pasley of Plymouth and Crystal (Chuck) Schwichtenberg of Bourbon, her daughter Marsha L. Pasley of Plymouth, and her daughter Susan K. (Gary) Marshall of Plymouth. Her great-grandchildren are Tyler, Cody, Sabrina, Caitlyn, Callie, Charlie, Sophia, Katie and Olivia. Also surviving is her sister, Bernice Shafer of Argos, three nephews and one niece.
She was preceded in death by her parents, husband on December 17, 1975 a brother, a sister and three nephews.
Visitation will be on Thursday, September 4, 2014 from 4 – 8 p.m. in the Johnson-Danielson Funeral Home, 1100 N. Michigan Street, Plymouth.
Funeral services will be held at 11:00 a.m. on Friday, September 5, 2014 in the funeral home, officiated by Rev. Charles Krieg. Visitation will resume one hour prior to the service in the funeral home.
Burial will be in the New Oakhill Cemetery, Plymouth.
Memorial contributions can be made to the Wounded Warrior Project, P.O. Box 758517, Topeka, Kansas 66675 or to the donor’s choice.