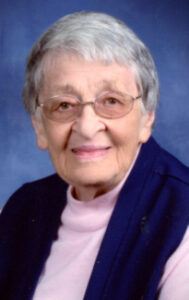 Thelma Baldwin, 94, passed away Thursday, July 09, 2015 at the Catherine Kasper Home in Donaldson. She had been a resident of Marshall County for the last five years, coming here from Frankfort, IN. Thelma was born in Hammond Indiana October 10, 1920 to Thomas J. Martinson and Doris (Byrnes) Martinson. She graduated from Hammond High School in 1939 and later Ball State University in 1943, where she met her husband James. She was married to James W. Baldwin July 4, 1941. After James returned from WW II, they moved to Frankfort, Indiana where they raised their family and taught school. She was a member of Trinity United Methodist church in Plymouth, the Order of the Eastern Star and the ISTA. She enjoyed board games, trivia, puzzles, and playing bridge. She especially enjoyed playing bridge at the Life Style center in Plymouth with the wonderful people there. She continued until blindness added to deafness to prevent her active participation but never forgot the kindness shown by the other players. She also loved the lake properties on Lake Shafer handed down by her father and passed on to her children. She was widowed just after her last child left college. She lived an independent life until she was 90 and spent many happy summers at the lake where she had been young with her sisters. Her school teaching fully occupied other times until she retired in 1985. Her memories of the many students, children of students and even grandchildren of former students of the Woodside Elementary School in Frankfort were vivid in her mind. Our family is grateful to the people at the Maria Center in Donaldson for prolonging her independent life style for several years and to the people at the Catherine Kaspar Home who made her final months as good as they could be. Thelma was preceded in death by her parents and by her sisters Murel Roberta Martinson, Doris Schaffer, and Olive Hoover. She was widowed when her husband died in 1972. Her infant granddaughter, Doris Everill, also preceded her in death. Three children, four grand children, two step-grandchildren, and five great-grandchildren survive her. Her children are Deana Everill of New Haven IN, James (Nancy) Baldwin of Plymouth, and Alice (Carroll) Dewees of Broken Arrow, OK. Her grandchildren are James (Laura) Everill, Richard Everill, James (Stephanie) Baldwin, and Anne (Zeb) Smitha. Her step-grandchildren are Dan Dewees and Julie Dewees. Funeral services will be at Johnson-Danielson Funeral Home, 1100 N. Michigan St., Plymouth, Indiana, on Monday, July 13 at 4 PM with Visitation from 2PM to 4PM
Burial will be in Frankfort, Indiana in Green Lawn Cemetery at 11 AM on Tuesday, July 14.
Memorial contributions may be made in Thelma’s name to the Trinity Methodist Church in Plymouth.