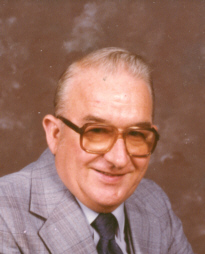 Theodore J. “Ted” Fox, 78, 9121 Suter Road, Plymouth, died of natural causes on Sunday, August 21, 2005, at 10:58 p.m. in Saint Joseph Regional Medical Center, Plymouth.
Ted was the son of Fred and Elizabeth Winters Fox. He was born on June 22, 1927, in Plymouth, Ind. He graduated from Monterey High School and was in the class of 1946.
After high school Ted joined the United States Army and was a World War II veteran, serving as a guard in Japanese prisons.
On April 21, 1956, Ted and Nadine Mowiser were married in St. Anne’s Catholic Church, Monterey, Ind.
Ted was employed first at Schlosser Brothers-Hawthorne Melody in Plymouth and retired from Wire Flex a number of years later.
He enjoyed gardening. A sports enthusiast and a Big Red fan, he particularly loved going to Plymouth basketball games. He and his wife spent their winters in Florida’s Avon Park.
Ted was a member of St. Michael’s Roman Catholic Church, the Knights of Columbus and the American Legion Post 27.
Ted is survived by Nadine, his wife of 49 years and by nine brothers and two sisters. The brothers are: Carl and Mary Fox, Plymouth, Ind.;Ralph and Christine Fox, Monterey, Ind.; Clement and Anita Fox, Plymouth, Ind.; Lloyd and Marilyn Fox, Winamac, Ind.; Donald and Eldonna Fox, Logansport, Ind.; Father Thomas Fox, Remington, Ind.; Richard and Judy Fox, Plymouth, Ind.; Kenneth and Ruth Fox, Plymouth, Ind., and James and Wanda Fox, Rochester, Ind.
Two sisters, also survive Ted’s death: they are Mary Zeigler, Georgetown, Texas, and Rose Ann and Carl Master, Jr., Monterey, Ind.
He was preceded in death by two brothers: Robert and Paul Fox.
Friends will be welcomed by the family on Wednesday, August 24, 2005, from 4 to 8 p.m. at the Johnson-Danielson Funeral Home, 1100 N. Michigan St., Plymouth. A Rosary will be prayed at 4 p.m.
A Mass of Christian Burial will be held at 10 a.m. on Thursday, August 25, 2005, in St. Michael’s Roman Catholic Church 615 North Center St., Plymouth, IN 46563 . The Rev. Fathers William Kummer and Thomas Fox will officiate.
Burial will be in New Oakhill Cemetery, Plymouth, Ind.
Memorial gifts in Ted’s name may be made to the American Cancer Association or to St. Michael’s Roman Catholic Church.