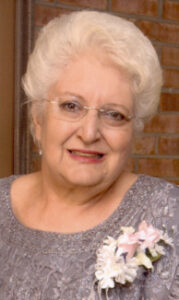 Theresa A. Lewis, 76, a longtime Plymouth resident, died Sunday afternoon, February 20, 2011 in her home of natural causes. Theresa has resided at Fairfield Garden Court since 2008 and formerly was a Charles Street resident.
Born November 1, 1934 in South Bend, Indiana, Theresa was the daughter of Gildo and Elizabeth (Ruggieri) Susanna. She was raised in South Bend and graduated from St. Joseph High School. On November 15, 1952 she married her childhood sweetheart; Richard J. “Dick” Lewis of South Bend. Together they had three children and in 1970 the family moved to Plymouth and began Lewis Construction. Theresa was a homemaker and provided daycare for several teachers out of her home.
Theresa enjoyed watching the Cubs, collecting bells and loved animals especially her Brittany Spaniel, “Corky” who after moving to Garden Court, has found a new home in Missouri.
Theresa is a member of St. Michael Roman Catholic Church, Plymouth and its Altar Rosary Society. In South Bend she had served many years as a Girl Scout Leader for Troop 228.
Surviving are her three children and their families. Son Richard N. “Rick” and his wife Donna Lewis of West Palm Beach, Florida; and daughters: Susanna A. and her husband Art Llovet of Rochester and Elizabeth A. “Liz” and her husband Brian Mosbey of Granger, Indiana.
Grandchildren include: Christopher (Brenda) Lewis and Heather (Michael) Anderson all of Plymouth; Stephanie (Doug) Heckaman of Argos and Adam (Sarah) Llovet of Illinois; Eric and Ryan Babendrager of Granger. Great grandchildren are: Ashton and Mia Lewis, Peyton and Micha Heckaman, and Kailynn and Sean Anderson.
Preceding Theresa in death was her parents, spouse Richard on August 10, 2007 and a half brother, James Susanna.
Visitation will be held on Thursday, February 24th from 4 – 8 p.m. in the Johnson-Danielson Funeral Home, 1100 N. Michigan St., Plymouth where a prayer service will take place at 7:30 p.m. that evening. A Mass of Christian Burial will be held at 11 a.m. Friday in St. Michael Church, 613 N. Center St. Plymouth. Pastor Rev. William Kummer will officiate.
Burial will follow in the St. Michael Cemetery, Plymouth.
Memorial gifts in Theresa’s memory may be made to the Marshall County Humane Society, P.O. Box 22, Plymouth, IN 46563 or St. Michael Church.