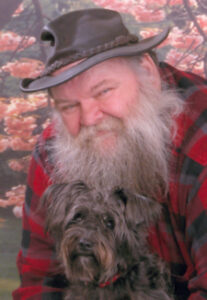 Thomas E. “Bear” Kline, 58, 5316 S. 1000 E., Culver, Ind., died of natural causes at 12:29 a.m. in Starke Memorial Hospital on Thursday, July 31, 2008.
Thomas was born on December 17, 1949, in Bremen, Ind. He was the son of Robert E. and Dorothy L. Crippen Kline.
He earned his G.E.D. through the military and met his wife, Elizabeth Doppel during the four years he served with the U.S. Army in Germany. They were married on Oct. 23, 1969, in Nurnberg, Germany.
A truck driver, Thomas retired from Tandem Transports out of Milwaukee, Wis.
He loved his grandchildren and was proud of each and every one of them. He enjoyed music and playing his guitar with the Smithers Jammers. Fond of animals, he was a member of the A.S.P.C.A.
Thomas was a member of the Church of Jesus Christ of Latter-Day Saints on Deer Trail.
He is survived by his wife, two daughters and two sons. They are Diane (Kevin) Longacre, Elkhart and their four children: Christian ( Jessica) Kline, Pfc. Jacob T. Longacre, Kevin and Joseph Longacre: Susanna (Randy) Smith and their children, Fawn Hansen, Hope and Heaven Smith, South Bend: Thomas Jr. (Tausha) Kline, and their children, Kyle and Lauren Kline, Argos and Roy M. Kline, Wyoming.
A brother, James Kline of Plymouth and a sister, Peggy Kline of South Bend, and several cousins survive as well.
Thomas was preceded in death by his parents.
Friends are invited to share memories with Thomas’ family on Monday, August 4, 2008 from 4 to 8 p.m. at the Johnson-Danielson Funeral Home, 1100 N. Michigan St., Plymouth, Ind.
Funeral services will be at 10 a.m. on Tuesday, August 5, 2008, in the funeral home President Don Hinsdale of the Church of Jesus Christ of Latter-Day Saints will officiate.
Burial will be in New Oakhill Cemetery.
Memorial gifts may be made in Thomas’ memory to the Starke County Humane Society.