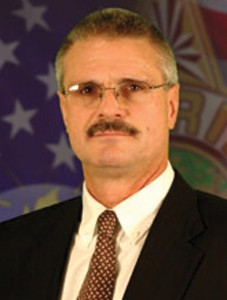 Thomas Gerard Chamberlin, 58, died peacefully in his home on Friday, August 28th, 2015 shortly after 9:30 pm. He was under hospice care and surrounded by his loving family. Tom was born in Fort Wayne, IN and moved to Argos, IN when he was 13. He was the son of Jim & Carole (McKean) Chamberlin – Meredith and the step son of Glen Meredith. He graduated from Argos high school in 1975 and married his high school sweetheart and wife of 37 years, Lea Ann Justus who survives. Tom’s identity was found in the grace of his savior Christ Jesus. Tom modeled Christ’s servant leadership as he led his family, his coworkers, and his community. He was a devoted son, brother, husband, father, & grandfather. Tom was a police officer in both the Argos and the Plymouth police departments and for over 25 years, he held positions of patrolman, investigator, sergeant, and Chief. His service to Marshall County continued as County Commissioner and as Marshall County Sheriff where he died in office and will be accorded full honors. Tom was an active member of Plymouth Missionary Church where he attended with his family. He loved being outdoors driving his jeep with top down, watching the sunset over Lake Michigan, kayaking the river, or enjoying the mountains of Colorado.
Tom is also survived by his three children, Rachel Chamberlin of Plymouth, IN, Meredith (Steve) Fick of Plymouth, IN, & Tom (Jennifer) Chamberlin Jr. of Hudson, OH. He had four grandchildren, Addison Fick, Emma Fick, Micah Fick, & Payton Chamberlin. He is survived by his mother, Carole Chamberlin-Meredith as well as four brothers & two sisters; Jim Chamberlin III of Surfside Beach, SC, Chris (Chuck) Biggs of Plymouth, IN, Becky (Alan) Collins of Plymouth, IN, Dave (Susie) Chamberlin of Plymouth, IN, John (Julie) Chamberlin of Plymouth, IN, & Matt (Mitch) Chamberlin of Plymouth, IN. His sister-in-laws Marsha Davis of Plymouth, IN & Judie Justus of Argos, IN also survive. He was preceded in death by his father Jim Chamberlin II and stepfather Glen Meredith.
A public visitation will be held on Wednesday, September 2nd from 1 – 8 p.m. in the Johnson-Danielson Funeral Home 1100 N. Michigan Street, Plymouth.
Open services will take place on Thursday, September 3rd at 11 a.m. in the Plymouth Wesleyan Church 11203 S. Michigan Road, Plymouth with Rev. Patrick L. Puglisi, pastor of the Plymouth Missionary Church officiating. Burial will be in New Oakhill Cemetery, Plymouth.
Members of the community may also pay tribute to Sheriff Chamberlin as his police escorted procession moves from the funeral home to the church and makes its way south on Michigan Street through downtown on Thursday morning at 9:15 a.m.
It was Tom’s personal wish to feed those in need so as a preferred form of memorial the family is asking that a food drive of non-perishable items or monetary gifts be brought to the visitation and service to benefit the Bread of Life Food Pantry, 125 E. LaPorte St., Plymouth, IN 46563 or The Center for Hospice Care 112 S. Center St., Plymouth, IN 46563.