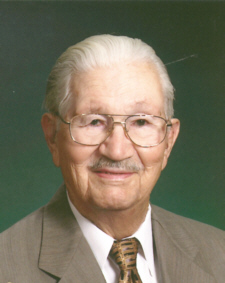 Thomas H. Gaddis, 90, formerly of Plymouth, died at 9:30 a.m. on Tuesday, April 22, 2008, in St. Luke’s Hospital, Boise, Idaho.
Tom was born on December 19, 1917 in Haymond, Ky. He was the son of Martin Vest and Francis Davis Gaddis. When Tom was five the family moved from Kentucky where his father had been a foreman in the coal mines to join their grandparents who had already relocated to Chicago. It was in Chicago where Tom grew up working various jobs to help support the family through the depression. And on one of his jobs he met Evelyn Ruth Witter who he married on April 9, 1937 in Crown Point, Indiana. Their first born child was a son, Thomas Lee; and it was shortly after Tommy’s birth that WWII broke out and Tom enlisted in the Navy and served as a CB in the Alaskan Aleutian Islands. After the War Tom returned home to Munster, Indiana and there second child, Virginia Carol, was born. The couple had nearly 66 years together both active in the Munster Community, Masonic and the Presbyterian Church.
Tom and Evelyn started Gaddis Construction company and later brought in a third partner Steve and Evea Bachnak who had successful business, partnership and friendship for over 30 years. Tom retired in 1980 to spend more time being a snowbird while boating, fishing and playing golf; an activity that both Tom and Evelyn enjoyed.
While living in the Pretty View condos, Tom was a member of the Plymouth Country club. He was a Mason for over 50 years.
Tom is survived by a daughter, Virginia, and a son-in-law, Gary Gribben of Boise, Idaho, daughter-in-law, Pat Gaddis of Hammond and three grandchildren: Carol Lee, Thomas Ray (Carey) Gaddis and T. Matthew Gribben; and three great grandchildren: Noah, Leighann and Caleb.
Two sisters, Ann (Roland) Peterson, Park Forest, Ill. and Ruth Nelson, Newport News, Va.
Tom was preceded in death by his wife; son, Thomas; and brother, Martin Gaddis; and sisters Virginia, Esther, and Francis.
Friends are invited to celebrate the life of Thomas Gaddis with his family, from noon to 2 p.m. on Saturday, April 26, 2008, at the Johnson-Danielson Funeral Home, 1100 N. Michigan St., Plymouth.
Funeral services will follow visitation at 2 p.m. on Saturday in the funeral home. The Rev. Paul Nye, pastor of the First Presbyterian Church and the Rev. Dr. Ron Liechty, will officiate.
Burial will be in New Oakhill Cemetery, Plymouth.
Memorial gifts in Tom’s memory may be made to First Presbyterian Church of Plymouth, Trinity Presbyterian Church of Boise or The CARE Club of Boise.