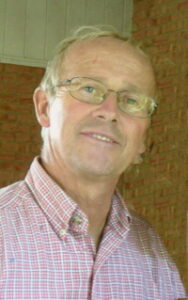 Timothy A. Manuwal, 61, passed away in his home on Saturday, February 22, following a long and courageous battle with cancer.
Tim was born on March 2, 1958 to Dale A. and Carolyn M. (Kamp) Manuwal. His youth was spent combing the Marshall County countryside for outdoor adventures. Though Tim always considered nature his primary classroom, he graduated from Plymouth High School with the class of 1976. Shortly after graduation, he enlisted in the United States Army.
On October 8, 1977, while stationed at Fort Bragg, North Carolina, Tim married his childhood sweetheart, Janet L. Smith in Dillion, South Carolina. They would begin their family while Tim was still serving, with son Thad Allen born in 1978. Following an Honorable Discharge in 1979, the family was able to make Plymouth home again. They welcomed their second child, daughter Jaymie Lynn, in 1980. For the next 40 years, Tim worked alongside his father, running the Manuwal Sawmill in Plymouth. He would eventually become president of the company.
Coming from an avid outdoor family, Tim was very involved in the Indiana Falconers Association, the Indiana Fur Takers and Indiana Trappers Associations, National Trappers Association, and Ducks Unlimited, including DU’s Greenwing program focusing on youth education and outreach. Tim and his father Dale were involved in many local conservation efforts. They often opened their sawmill to groups of volunteers, using locally grown and sawn lumber to build wood duck and bluebird boxes for use on properties throughout the county. Tim had an unending desire to enhance his understanding of the natural world. He was an avid gardener, falconer, beekeeper, a ginseng and Shitake mushroom grower, hunter, angler, and trapper – the avocation he’s probably best known for. For over 10 years Tim owned and operated Discreet Wildlife Management, helping local landowners with wildlife issues of all kinds. For those with nuisance bats, bees, or beavers, Tim was a trusted resource throughout Marshall and surrounding counties. He loved travelling to Arkansas to trap beavers and other furbearers, providing a service to many farmers and landowners in The Natural State. Among Tim’s favorite pastimes was the sharing of his outdoor knowledge with old and young alike. He was an integral member of the Outdoor Men’s Ministry at Crossroads Evangelical Free Church, helping to plan and host a series of events focused on Christian fellowship while celebrating God’s awesome creation. On February 8, at the most recent such event, Tim was honored by the Indiana Department of Natural Resource’s Division of Law Enforcement with a certificate of recognition presented by local Conservation Officers. Tim loved his family and their get-togethers. He adored his grandchildren and loved playing with them and being outside with them, trapping animals or just enjoying nature.
Tim is survived by his wife Janet and their children: Thad (Amanda) Manuwal of Minot, ND and Jaymie (Randy) Dickson of Grovertown, IN; grandchildren: Jalina, Teddy and Max Manuwal, and Emily, Tyler and Thomas Dickson; his father, Dale Manuwal of Plymouth; his siblings: Elizabeth Bottorff, Barbara (Garry) Hartman and Vicki Manuwal, all of Plymouth; sister-in-law Carol Meadows of Culver and brother-in-law Alan (Dawn) Smith of Plymouth, and several nieces and nephews.
He was preceded in death by a grandchild, Finn Manuwal, his mother, Carolyn, his brother, Jim, and his in-laws Albert and Betty Smith.
Visitation will be held on Thursday, February 27, 2020 from 3-7 p.m. at the Johnson-Danielson Funeral Home, 1100 N. Michigan Street, Plymouth.
Funeral services will be held on Friday, February 28, 2020 at 11 a.m. at the funeral home, Pastor Scott Yoder officiating. Military Honors will be provided by members of the American Legion Post 27, Veterans of Foreign War – Marshall County Post 1162, and Disabled American Veteran Chapter 42.
Memorial contributions can be made to the IU Simon Cancer Center c/o IU Foundation, PO Box 7072, Indianapolis, IN 46207 or the Center for Hospice Care, Plymouth Office, 112 S Center Street, Suite C, Plymouth, IN 46563.