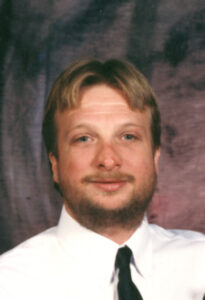 Timothy “Tim” Meredith, of 516 S. Michigan St., LaPaz, Indiana, died in Memorial Hospital, South Bend, of a work related injury following a fall, at 2:40 p.m. on Friday, February 3, 2006.
Tim was 43-years-old.
He was cherished by many special friends that he held close to his heart. Tim always made the time to help others who needed his assistance. Born in Michigan City, Indiana, on May 24, 1962, Tim was the son of Charles Meredith and Sandra Ball Jankowski.
On November 1, 1998, in LaPaz, Indiana, Tim and Paula Tyler were married.
He had been employed, since 1998, with the North Coast Roofing Systems of Mishawaka, Indiana.
Tim was an outdoorsman with a love for life. He enjoyed hunting and fishing and being with his partners and his family. He was a fan of the History Channel and a reader of newspapers, keeping up with current events as well as historical ones.
At one time, he had long, flowing blond hair of which he was proud. After being harassed by his family, he had it cut and donated to Locks for Love. He also was an organ donor, giving the ultimate gift to help others after his death.
He was a member of the National Rifle Association, the Plymouth Moose Lodge, and the Fulton County Gun Club.
He attended the Bourbon Pentecostal Church.
Tim is survived by his wife, Paula, and children: a son, due to be born in April, Tyler Isiah and Alexandria Tyler, both of LaPaz; Sean Meredith, Mishawaka; and Melissa and David Johnson along with their children, Paishence and Christian, Mishawaka.
Sandra Jankowski, Tim’s mother, living in Florida, also survives, along with his father, Charles Meredith, of Florida, two brothers, Scott and Bryan Meredith and two sisters, Kathy Meredith and Nicki Meredith, both of Florida. Tim is also survived by his grandmother, Hildegard Meredith, of Florida.
Other survivors are: parents-in-law, Paul and Linda Tyler, LaPaz; brothers and sisters-in-law, Tim and Leslie Tyler, Plymouth, and Jeff and Mary Tyler, Westfield, Ind., and sister and brother-in-law, Kelli and Dave Glassburn, Plymouth. Numerous nieces and nephews survive as well.
Friends will be welcomed by the family on Tuesday, February 7, 2006, from 4 to 8 p.m. in the Johnson-Danielson Funeral Home, 1100 N. Michigan St., Plymouth, Ind.
Funeral services for Tim will be held in the funeral home on Wednesday, February 8, at 11 a.m. The Rev. Mark Cottrill, pastor of the Bourbon United Pentecostal Church, will officiate.
Burial will be in New Oakhill Cemetery.
Memorials to Tim are requested for the Meredith Family Fund at the Teacher’s Credit Union to provide for Tim’s children, Alex and Sean and his unborn baby son, Tyler Isiah Meredith