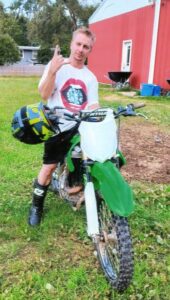 He attended Triton High School graduating with the class of 2004. On October 31, 2019 he married Emilie Creighbaum in Plymouth.

Timothy worked for Hoosier Tire. Known as a man that never knew a stranger, he would do just about anything for anyone. An intelligent man that would often educate others on life lessons. To Emilie he was her best friend and soulmate. She would tell you that he definitely lived life to the fullest.

He enjoyed riding his dirt bike, fishing and watching his Dallas Cowboys play anytime they were on.

Per the wishes of the family there will be no services.