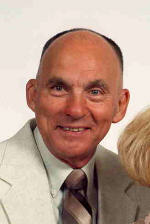 Lifetime Marshall County and longtime Bremen resident, Tom E. Boyer, 69, has died following an illness, at his residence, at 5:50 p.m., Saturday, May 25, 2002. He died in the loving care of his family with the support of the Marshall County Hospice. Born on Sept. 13, 1932, in Akron, Ind., Tom was the son of Everett E. and Margaret Kulscar Boyer. He graduated from LaPaz High School with the class of 1950. He served his country as a member of the United States Army during the Korean Conflict from 1953 to 1955. On June 26, 1955, Tom and Carol A. Birkey were married in Bremen. Tom retired from the South Bend Tribune in 1991 after 35 years of service. His position at retirement was that of a composing room foreman. An avid sports enthusiast, he and his family, enjoyed 25 years of fishing in Ludington , Mich. His family, particularly his grandchildren, were the blessings of his life. He was a loyal supporter at their many school and athletic events. A volunteer with the Bremen Meals on Wheels program, Tom interacted with all generations. His tastes were simple and quietly served those in need. Tom is survived by his beloved wife, Carol, and their three loving daughters and their families. They include; Lori L. and Larry K. Verhaeghe, Bremen, and their three children: Ben and Courtney Verhaeghe, Dustin Verhaeghe and his fiancee Shannon Wagler and Meghan (Verhaeghe) and John Strang and their daughter, Tom’s great-granddaughter, Madison Strang. Amy B. and Brian J. Lechlitner, Bremen, and their daughters, Brittany and Lindsey Lechlitner. Kristi A. and Paul T. Harris, Leesburg, with Shaila and Breanne Howard. Tom was preceded in death by his parents, a brother, William Boyer and a sister, Willowdean Krivanek. Friends may visit with the family on Tuesday, May 28, 2002 , from 3 to 8 p.m. in the Johnson-Danielson Funeral Home, 1100 N. Michigan St. , Plymouth , Ind. , and for one hour prior to services on Wednesday in the church. The funeral services will be at 11 a.m. on Wednesday, May 29, 2002 , in the Nappanee Missionary Church , 28061 CR 50, where Tom attended worship services. Pastors Norm Reimer and Dave McGee will officiate. Burial will be in the Bremen Cemetery , Bremen . Memorial gifts may be made to the CARE Foundation, Inc., for construction of a facility for Cancer Treatment Center patients and their families needing overnight lodging during treatment. Donations may also be made to the Nappanee Missionary Church, or to the charity of the donor’s choice.