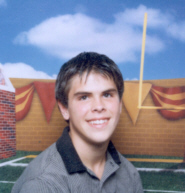 Travis A Wieringa died at 1:07 p.m. on Thursday, December 23, 2004, in an auto accident on State Road 17, one mile south of 10B Road.
Born on May 6, 1990, in Rochester, Ind., he was just 14 years old.
An eighth grader at Lincoln Jr. High School, Travis was the son of Chuck Wieringa and Laurie Wright Belcher. He lived at 2401 N. Michigan St., in Plymouth.
John McNeil, principal of Lincoln Jr. High School stated that the loss of Travis will have an impact on the students and faculty of LJH.
“Travis was a nice young man, a good student who was quiet, unassuming with many friends,” McNeil said.
He played football, basketball, baseball and skateboarded with his friends along with Play Station and hanging out.
He belonged to several study groups and was looking forward to playing freshman football this next fall.
Travis is survived by his father, Chuck and Susie Wieringa, Nappanee; his mother, Laurie and Shane Belcher, Plymouth, and by four sisters and a brother.
They are: Kelsi Wieringa, Krissy Wieringa, Tori Godwin, Emily Belcher and Cody Wieringa.
Several sets of grandparents also survive Travis’ death. They are: Wanda and Fred Lloyd, Lonnie and Janet Wagers, William and Nita Wieringa, Pat and Johnny Whitt, Otis and Mary Belcher and Floyd and Linda Burton.
Travis is also survived by two great grandmothers, Marilyn Moreno and Helen Deicel.
Several aunts and uncles also survive.
Visitation with the family will be from 3 to 8 p.m. on Tuesday, December 28, 2004, in the Johnson-Danielson Funeral Home, 1100 N. Michigan St., Plymouth, Ind.
Funeral services in the funeral home will be at 2 p.m. on Wednesday, December 29, 2004. Burial will be in New Oakhill Cemetery.
Memorial gifts may be made to the Travis Wieringa Trust Fund.