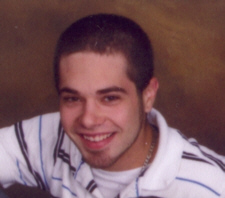 Travis Jon Childress, 23, a Plymouth resident, formerly of Michigan City, passed away at 7:00 p.m. on Friday, March 16, 2012, at Memorial Hospital, South Bend, from injuries sustained in an automobile accident.
The son of Randal Childress and Judith Miller Yates. Travis was born on December 6, 1988 in Michigan City. He had attended LaVille High School.
A construction worker, Travis liked to hunt, draw and play guitar.
Travis is survived by his daughter: Natalie Bowling of Elkhart; mother and step-father: Judith M. and Jeff Yates of Bremen; father and step-mother: Randal and Beth Childress of Michigan City; two half-brothers: Michael Roahrig of Plymouth and Chad and Lisa Childress of Michigan City; three step-sisters; maternal grandmother: Amelia Miller of Portage; paternal grandmother: Irene Childress of Michigan city and step-grandmother: Mary Jane Faurote of Plymouth.
He was preceded in death by his grandfathers.
Friends may visit with Travis’ family on Wednesday, March 21, 2012 from 5:30 to 7:30 p.m. (EDT) in the Johnson-Danielson Funeral Home, 1100 N. Michigan St., Plymouth, Indiana .
Memorial services, officiated by Rev. Joan Myer, will be held immediately following visitation at 7:30 p.m. (EDT) in the funeral home.
Memorial gifts may be made to Judith Yates, in care of the funeral home.