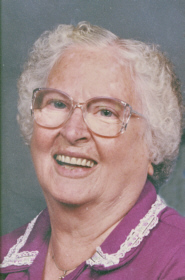 Treva I. Ritenour, 89, of 15715 N. Michigan Rd., Argos, died of natural causes in Miller’s Merry Manor, Plymouth, at 12:50 p.m. on Sunday, June 12, 2005.
Born the daughter of George Allen and Florence M. Knepper Eizinger on February 27, 1916, in Tippecanoe, Ind., Treva graduated from Tippecanoe High School with the class of 1934.
Treva and Andrew H. Ritenour were married in Tippecanoe, Ind., on his birthday, February 16, 1938. Andy died on February 22, 1994.
A homemaker, Treva and her family moved from Tippecanoe to the Plymouth/Argos area in 1943.
She was an active and talented woman. She wrote countless letters to neighbors who were in the military. Adept in needle work, she embroidered many lovely items for gifts.
Treva and Andy, season ticket holders, were faithful supporters of Plymouth athletic teams, often taking their grandchildren to the games when they were very small. Treva attended sporting events well into her 80s.
She always appreciated flowers, and always had an immaculate flower garden while living in the country.
One of her biggest sources of enjoyment was coming into contact with children; she was always known to have Smarties candy in her purse.
An animal lover, Treva taught her parakeet to say, “Where’s Gary?” and “Frank’s down to Purdue!” She also had several Siamese cats named Bandit.
Treva is survived by three sons, two daughters and their spouses. Her sons are Gary and Margaret Ritenour, Atascadero, Calif.; Frank and Anita Ritenour, Santa Maria, Calif; and Brian and Joy Ritenour, Plymouth. Her daughters are Diane and Roy Swihart, Plymouth and Judy and Jerry Salmon, Brownsburg, Ind.
Nine grandchildren and nine great-grandchildren also survive, together with a sister, Donabelle and Don Pfeiffer and a brother, Dale and Nanette Eizinger, all of Rochester, Ind.
Treva was also survived by family from her husband’s side. Russell and Mildred Ritenour, Etna Green, Ind, Jim Jackson, Fort Wayne, Ind, Kenneth and Marie Ritenour, Bourbon, Ind, Edith and Harold Hess, Plymouth, Ind, Edna and Merl Swihart, Plymouth, Ind.
Treva was preceded in death by her parents and her husband and by her brother-in-law, and two sister-in- laws, Elmer and Virginia Ritenour, and Ruth Jackson.
A celebration of her life will be held in the Johnson-Danielson Funeral Home, 1100 N. Michigan St., Plymouth, from 4 to 8 p.m. on Thursday, June 16, 2005 and will continue after 7:00 am on Friday, June 17, 2005.
Funeral services for Treva will be on Friday, June 17, 2005, at 10:30 a.m. in the funeral home. Pastor Gail Law, of the Inwood United Methodist Church, where Treva was a long-time member, will officiate.
Burial will be in New Oakhill Cemetery, Plymouth.
Memorial gifts in Treva’s memory may be made to the Inwood United Methodist Church.