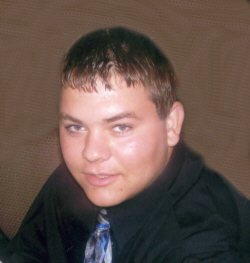 Tyler James Mattix, 18, of 506 St. Bourbon St., died in Memorial Hospital, South Bend, at 9:25 a.m. on Friday, February 11, 2011.
Tyler was born in South Bend, the son of Duane Mattix and Misty Stewart on March 27, 1992. He attended Plymouth Schools.
An athletic and active young man, Tyler enjoyed football, skate boarding, wake boarding, skiing, boating and motorcycling.
He was an avid Colts fan, and he enjoyed being with his family.
Tyler is survived by his mother Misty Stewart and her fiancé, Adam Cook, Bourbon, and his father Duane and step-mother, Susan Mattix, Plymouth.
Also surviving is a sister Danyiel “Shireman” and Evan Byers, Plymouth, and two brothers, Brandon and Derek Mattix, also of Plymouth.
Tyler’s maternal grandfather James and step grandmother, Sharon Stewart of Plymouth and his maternal grandmother, Janice Lamb, survive as well as does his paternal grandparents, Kent and Donna Mattix of Plymouth. His step paternal grandmother, Marie Pearl also survives.
A niece Addison Byers also survives him.
Tyler was preceded in death by his step paternal grandfather, James Pearl
Friends may call at the Johnson-Danielson Funeral Home, 1100 N. Michigan St., Plymouth, on Tuesday, February 15, 2011, from 4 to 8 p.m. Funeral services for Tyler will be held in the funeral home on Wednesday, February 16 at 11 a.m. The Rev. Douglas Jividan, pastor of the Plymouth Baptist Church, will officiate.
Memorial gifts in Tyler’s memory may be made to The Boys and Girls Club of Marshall County 314 East Jefferson Street Plymouth, Indiana 46563
Funeral Director – Kevin L. Russell – kevin@johnson-danielson.com