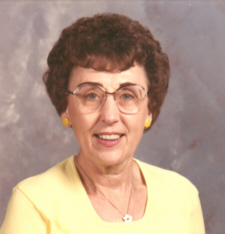 Vada M. Kline, 84, a lifetime Plymouth resident, died a 1:00 pm. on Sunday, June 7, 2009 in Miller’s Merry Manor, Plymouth, after a lengthy illness.
The daughter of Oliver L. and Arvilla M. Bellman Trowbridge, Vada was born on April 15, 1925 in Plymouth. She was a 1943 graduate of Lincoln High School.
On July 20, 1945, Vada and Lowell W. Kline were married in Plymouth. Lowell preceded her in death on May 14, 1983.
Vada had worked for Plymouth Community Schools for 25 years, as school secretary at Jefferson Elementary and Lincoln Jr. High, and was the Financial Secretary at Plymouth High School when she retired in 1987.
She was a member of Delta Theta Tau, Eastern Star, the Hospital Auxillary, various election boards, Democratic Ladies, Band Boosters, Athletic Boosters, United Way, Heart Fund, Red Cross, Campfire and the First Presbyterian Church where she was a member of the U.P.W. Vada is survived by two daughters: Linda (Jim) Kepler and Debra Drubert, both of Plymouth; three grandchildren: Lori (Terry) Allen, Stacy (Paul) Guerin and Dan Drubert and two great-grandchildren: Joshua and Benjamin Allen.
She was preceded in death by her parents and her husband, Lowell.
Friends are invited to share their memories of Vada with her family on Wednesday, June 10, 2009, from 11 a.m. to 2 p.m. at the Johnson-Danielson Funeral Home, 1100 N. Michigan St., Plymouth.
Funeral services for Vada, officiated by the Rev. Jean Sparks, pastor of the First Presbyterian Church, will follow visitation at 2 p.m. in the funeral home.
Private burial will take place in New Oakhill Cemetery, Plymouth, at a later date. Memorial gifts may be made to the Marshall County Humane Society.