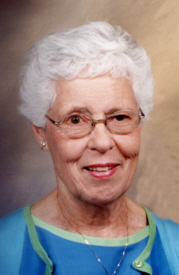 POSTPONMENT OF SERVICES… Services for Velma Butler have been postponed today and will be moved to Saturday, January 2nd the First United Methodist Church, Plymouth. Visitation 11:30 a.m. – 1:30 p.m. Services will begin at 1:30 p.m. in the church. Burial will then follow in the New Oakhill Cemetery, Plymouth.
Velma Butler, 88, formerly of Ferndale Street in Plymouth, passed away Monday, December 21, 2015 in the Allisonville Meadows Nursing Home in Fishers, Indiana. On March 4, 1927 in a hospital in Richmond, Indiana, Velma Ann was born to Everett J. and Goldie (Gifford) Smith. Velma graduated from Purdue University with a Bachelor’s Degree with a major in home economics. She was President of her Phi Mu Sorority and the Pauhellenic Council. She got her first teaching job in Plymouth in the fall of 1949. In the spring of 1951, Velma would meet a fine man by the name of Lyman Butler. Just six months later, in Richmond, Indiana on December 23, 1951, Velma would take as her husband Lyman Butler. To this union would come four children: Beth, Todd, Kim and Bruce. Lyman would precede her in death on November 25, 2015.
Velma taught at the junior high and high school until 1957. She would go back to teaching half days at the Lincoln Junior High from 1968-1972. In 1976-1985 she did substitute teaching at the Junior & Senior High Schools. From there, Velma taught home economics and was the I.C.E. Coordinator for Knox High School until her retirement in 1987.
While teaching, Velma also was partial owner of The Sewing Nook in Plymouth from 1971-1976. The store sold knit fabrics, woven fabrics and Viking sewing machines. She also taught many sewing classes to adults.
Velma and Lyman were lifetime members of the First United Methodist Church in Plymouth, where she taught child and adult Sunday school classes. She was the former Treasurer and President of Kappa Kappa Kappa Sorority, former President of the Marshall-Starke Development Center Board, and Treasurer of Cancer Association of Marshall County for four years. Velma enjoyed to golf as well and was a member of the Ladies 18 Hole and 9 Hole Golf Associations.
Lyman and Velma moved to Fishers, Indiana in October of 2015, so their children could better care for their needs. Velma would be re-united with the love of her life for their 64th wedding anniversary on December 23, 2015.
She is survived by her children: Beth Butler of Fishers, Todd (Karen) Butler of Fishers, Kim M. Butler of Plymouth, and Bruce Butler of Ft. Wayne. Her grandchildren: Drew, Kyle and Haley Butler of Fishers, brother-in-law, Henry G. (Dorothy) Butler of Plymouth, brother-in-law, Ed Stegman of Naperville, IL, and two nieces and four nephews, also survive.
She was preceded in death by her parents and sister, Marie Stegman.
In lieu of flowers, memorial contributions can be made to the Marshall-Starke Development Center 1901 Pidco Drive, Plymouth, IN 46563 or to the First United Methodist Church.