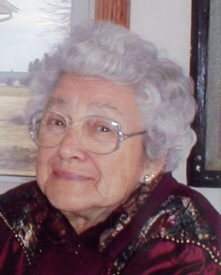 Velma E. McCollough Singrey, 102, life-long resident of Plymouth, passed away Tuesday morning, December 8, 2015 in her residence. Velma was born June 16, 1913 in Plymouth to the late Earl and Cecil (Welch) Stough. She graduated from Plymouth High School.
On April 16, 1933, she married Wendell McCollough; he preceded her in death October 16, 1986. She then married Arnold Singrey on February 7, 1994; he preceded her in death March 11, 2002. Velma was a home-maker and a farm wife for many years, she then went to work at the Plymouth Hospital, and worked in the kitchen for thirteen years.
Velma attended the Kingdom Hall Jehovah’s Witness in Plymouth, Florida and Arizona. She was baptized when she was 93 years of age in Florida. She loved to read her bible and the newspaper. She also enjoyed sewing clothes, milking cows and baking. Surviving are her children; Loren and Ethel McCollough, Plymouth, Lowell and Ardelia McCollough, Bourbon, thirteen grandchildren, twenty-six great grandchildren and twenty-two great-great grandchildren, nephew and his wife; David and Jan Stough and family. Also surviving are her step children; Phyllis and Norm McGuire, Lowell and Jean Singrey, Lee and Patsy Singrey, Margie and Steve Snyder. She was preceded in death by her parents, her two husbands, two great-grandchildren, one brother, one sister and one stepson. The family will receive friends on Friday, December 11, 2015 from 4-7 PM in the Johnson-Danielson Funeral Home, 1100 N. Michigan Street, Plymouth, Indiana, and from 10:00 AM until time of service on Saturday. Funeral services will be held on Saturday, December 12, 2015 at 11:00 AM in the funeral home with Mark Klingerman officiating.
Burial will follow in the Oakhill Cemetery, Plymouth.
Preferred are memorial contributions to: The Center for Hospice Care, 112 South Center Street #C Plymouth, Indiana 46563.