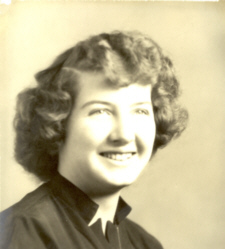 Velma Rose (Samuels) Ottow, age 75, passed away on Saturday, April 18, 2009, at St. Joseph Regional Medical Center in Plymouth, Indiana after a short illness.
Mrs. Ottow was born October 27, 1933 to Everett (Jack) and Goldia (Gross) Samuels in Plymouth. She was a lifelong Plymouth resident.
She graduated from West High School as the Valedictorian of her class in May of 1951
In June of 1951, in Donaldson, Indiana, she married Charles Thomas Ottow.
Mrs. Ottow worked at Ancilla egg farm for many years until that operation closed.. She was the owner/operator of the FotoMat/FotoFinish store in Plymouth for over 15 years until she retired. Mrs. Ottow is survived by her husband, Charles, four children: Ron of Knox, Kathy (Vince) Sallee, of Knox, Virginia (Barry) Beaman, of Carrollton, Georgia and Mike (Lisa) Ottow of Plymouth, seven grandchildren, Brandon (Jessica) Ottow of Tennessee, Nathan (Laura) Ottow of Indianapolis, Derek Sallee of Knox, Heather Beaman of Georgia, Monica (Derek) Monk of Georgia, Garin (Michelle) Ottow of Winamac and Whitney Ottow of Plymouth. She also has four great-grandchildren, Jonathan, Caitlyn and Alexander Ottow, all of Winamac and Aaronn Monk of Georgia.
Mrs. Ottow came from a very large, loving family and is survived by four sisters, two brothers-in-law and one sister-in-law. Dollie (Richard) Ketcham, Ethel Johnson, Cleo (Jr.) Berger, Ruby Whiteman all of Plymouth and Margaret Dehne-Samuels of Culver. Many, many nieces and nephews, and great nieces and nephews. She was preceded in death by her parents, a daughter, Barbara Ann Ottow and five brothers and four sisters; Ernest, Albert, John Tommy, and Ira Samuels, Stella Hagle, Lulu Patterson, Ruth Murray, and Wanda Samuels.
Friends and family may come to show their love for Velma and her family on Tuesday, April 21, 2009, from 3:00 pm to 8:00 pm at the Johnson-Danielson Funeral Home, 1100 N. Michigan St., Plymouth, Indiana.
Funeral services will be held in the funeral home on Wednesday, April 22, 2009, at 2:00 pm, with Pastor Ed Hasnerl of Knox officiating.
Burial will be in New Oakhill Cemetery, Plymouth.
Memorial contributions in memory of Velma may be made to The Center for Hospice and Palliative Care, Inc.