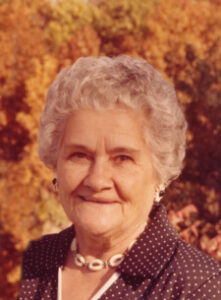 Vera E. McCartney, died of natural causes on Friday, April 13, 2007, in the Bremen Health Center, Bremen, Indiana. She was 99-years-old.
A homemaker, Vera helped her husband farm and together they founded Mac’s Market, a popular grocery, south of LaPaz. She enjoyed her family, most especially, her grandchildren and great-grandchildren.
Vera was born on January 21, 1908, in Washington, Iowa. She was the daughter of Clark and Ellen Yeoman Tucker. She graduated from Washington High School, Washington, Iowa.
On November 29, 1933, in Brooklyn, N.Y., Vera and Schylor McCartney were married. Schylor died on March 8, 1996. The family had moved to the Plymouth area in 1940.
She was a member of the House of Prayer.
She spent over 25 years doing house keeping services for several area families that she revered. Up until the summer of 2006, she still crocheted and years before, enjoyed gardening and playing the piano.
Vera was an ardent basketball fan and reveled in Hoosier Hysteria.
She is survived by two sons and a daughter-in-law. They are sons: Ronnie McCartney, and Scott (Marcia) McCartney, all of Plymouth, Ind., and Judy McCartney, also of Plymouth.
Seven grandchildren and 18 great-grandchildren and 2 great-great grandchildren also survive.
They are: Scott and Marcia McCartney’s daughter, Lisa and her husband Eric Springman have two children, Shawn and Cameron: and son Lee McCartney survives as well.
Ronnie’s children: Neil (Jolie) McCartney and their children: Melinda, Tanner, Trey and Makenna: Brien McCartney and Beth (Scott) Styers and their children, Brandon and Justin.
Also daughter-in-law Judy and her late husband Ed’s children: Doug (Karen) McCartney and their children: Adam, Rachel and Kristi: Tim (Kelly) McCartney and their children: Mason, Myla and Millen: Linda (Jeff) Baney and their children: Michael, Marion, Marrissa and Marcus. Also surviving is grandson Eric and his wife, Nan McCartney.
Vera was preceded in death by her husband, their son, Edward, 2 brothers and a sister.
Friends will be welcomed to celebrate the life of Vera McCartney with her family on Monday, April 16, 2007, from 5 to 8 p.m. in the Johnson-Danielson Funeral Home, 1110 N. Michigan Street, Plymouth, Indiana.
Funeral services for Vera will be on Tuesday, April 17, 2007, at 11:30 in the funeral home. The Reverends Ronald Humphrey and Sam McClimans, will officiate.
Burial will be in the Mt. Zion Cemetery, Lakeville, Ind.
Memorial gifts in Vera’s memory may be made to a charity of the donor’s choice.