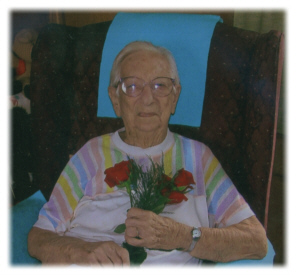 Ninety-nine year old Vera R. Topel passed away in her sleep on the morning of Saturday, August 7, 2010 at her home of natural causes. Vera has made her home at the Gatewood Estates for the past 30 years.
Born in Wheatfield, Indiana on September 24, 1910, she was the daughter of Peter and Ida (Danford) Heil. She was raised in the Walkerton area and attended school there.
On August 30, 1956 in Chicago, she married Clarence F. Topel who preceded her in death on July 5, 1978. Vera was a homemaker who enjoyed crocheting and doing crafts.
She is survived by one daughter, Phyllis I. Neiswender of Bremen and three step-daughters; Lorraine M. (Don) Gailus of Plymouth, Beverly Weaver of Blue Island, Ill. and Dorothy (Richard) Schmeltzer of the Chicago area. Thirteen grand and thirteen great-grandchildren also survive as well as one brother, Walter L. Heil of Walkerton and many nieces and nephews.
Preceding her in death was one son, Raymond E. Good, two brothers and one sister.
Services will be held at 11 a.m. EDT Wednesday in the Johnson-Danielson Funeral Home, 1100 N. Michigan St., Plymouth with Rev. Charles Krieg officiating. Friends may call after 9 a.m. until time of services.
Burial will follow in the Cedar Park Cemetery, Chicago.
Memorial gifts may be made to the charity of the donor’s choice.