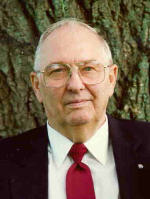 Verl Eldon Roose, 83, of 1060 Lincolnway East, Plymouth, died at 8:26 a.m. on Saturday, June 1, 2002, in Saint Joseph Regional Medical Center, Plymouth. Verl was born on Mar. 25, 1919, the son of Clarence O. and Emma Mae Stouder Roose. He was a veteran of World War II, serving in the military for four years. On May 16, 1942, in the Methodist church in Mentone, Ind., Verl and Freda Roose were married. The couple just celebrated their 60th wedding anniversary on a trip to Wisconsin. A salesman for Schlosser Bros. Dairy & Ice Cream for 40 years, Verl worked most days from 6 a.m. to 9 p.m. He retired after working for five years for Bomarko of Plymouth. He loved to travel; he and Freda visited every state in the union and every province in Canada and Mexico. For years Verl enjoyed parking cars at the Blueberry Festival for the Masonic Lodge. He was a loyal member of Lodge 149 and of the American Legion Post 27 in Plymouth. Verl is survived by his loving wife, Freda and several nieces and nephews. He was preceded in death by his parents, two brothers, Charles and Wayne and one sister, Helen Brundige. Friends may come to share memories and visit with his family on Tuesday, June 4, 2002, from 4 to 8 p.m. at the Johnson-Danielson Funeral Home, 1100 N. Michigan St., Plymouth. Masonic Memorial Rites will be provided at 7:30 p.m. in the funeral home. Funeral services, officiated by the Rev. Charles Krieg, will be held in the funeral home at 10 a.m. on Wednesday, June 5, 2002. Military graveside services in the Mentone Cemetery will be accorded to Verl for his service to his country.