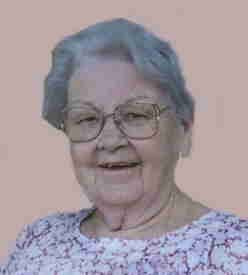 Vessie Bridgewater, 93, of Scottsburg, Indiana a resident passed away following an illness at 3:40 a.m. on Wednesday, August 14, 2013 in Miller’s Merry Manor, Plymouth where she has been a patient since May 18th of this year.
Born on October 29, 1919 in Lambric, Kentucky and the oldest daughter of 15 children, Vessie was the daughter of Benton and Minnie (Rowe) Mann. After the death of her mother at the age of four, she was raised by her step-mother, Lucy (Conley) Mann.
On August 28, 1942 in Alabama, Vessie married Gerald E. “Cap” Bridgewater. He preceded her in death in April of 1985.
After graduating from high school, Vessie worked various jobs through her lifetime. She was a housekeeper for Shutz, a former waitress, worked at Morgan’s Canning Factory, Scottsburg Novelty and Burt’s Pharmacy.
She was a former member of the First Baptist Church of Scottsburg and had attended Vienna Baptist Church.
Vessie enjoyed doing needlework, quilting and crocheting. She loved gardening and was an excellent cook and pie baker.
She is survived by her two sisters: Hazel Palmer of Ohio and Mary Fugate of Kentucky; and many nieces and nephews.
She was the “most loved aunt” who cared for many sick members of her family through the years, including her parents.
Preceding in death was a son Gerald E. “Butch” Bridgewater, brothers: Walter, Alton, Kern, Arthur, Newton, Ham, Seldon and Adam along with sisters: Della Porter, Lourane Holtzclaw, Phyllis Cripe and Ruth Napier.
Visitation will be from 5 – 7 p.m. on Thursday, August 15th in the Johnson-Danielson Funeral Home, 1100 N. Michigan Street, Plymouth. Funeral services will follow at 7 p.m., officiated by Hospice Chaplain Tom Padberg.
Visitation will continue on Saturday, August 17th from 1 – 3 p.m. in the Stewart & Hoagland Funeral Home 80 N. 1st Street, Scottsburg, Indiana where services will follow at 3 p.m.
Burial will be in the Cravens Cemetery in Vienna.
Memorial gift contributions may be given to the American Heart Association 208 S. LaSalle St. Ste 1500 Chicago, IL 60604-1242 or Center for Hospice Care 112 S. Center St. Plymouth IN 46563.