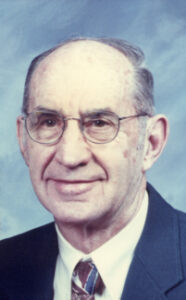 Victor E. “Vic” Stockman, passed into the presence of his Savior at 12:59 p.m. Monday, March 19, 2012 in Pilgrim Manor following an illness. He was 84 years old but rarely let that stand in his way.
A lifelong Plymouth resident and community leader, Vic, a loving husband, father, grandfather and friend, lived on Hope Blvd. since 1960.
He was extremely talented and hardworking, known for his athleticism and variety of interests. He will also be remembered for his good humor such as riding in the Blueberry Parade, dressed like a clown and stuffed into a makeshift washing machine with bubbles floating above his head. Vic was born to George E. and Minnie Blanche (Kizer) Stockman on February 9, 1928. He grew up on a farm in Inwood, a few miles east of Plymouth.
An excellent student, academically third in his class at Plymouth’s Lincoln High School, he graduated in 1946, and was voted the “Outstanding Boy.” In high school, he played varsity basketball and ran track all four years. The half-mile was his specialty. He continued running for most of his life or a mere 24,000 miles. Among the highlights is his completion of five marathons in Honolulu. His last marathon was at the age of 68. He also was a few paces behind President Jimmy Carter at Camp David during a 10K run when the Chief Executive passed out cold into the arms of the Secret Service.
Vic also took up bicycling – clocking in over 30,000 miles. He went on numerous Wandering Wheels expeditions and “Possum” rides through several states and riding Coast to Coast at the age of 74.
At the age of 19 wanting to leave farming behind, he started a refrigeration and repair business in 1947. Then on October 10, 1948, Vic and Mary Lou Randt were married in South Bend, making their home in Plymouth. Last fall, they celebrated their 63rd. wedding anniversary.
In ’59, he opened the first coin-operated laundry in Marshall County. Eventually he had nine more laundries in four different counties. The family continues to operate the Country Charm Cleaning Center in Plymouth yet today.
Vic had a unique ability for taking junk and building useful stuff.
He rigged up two gas-fired boilers from a discarded commercial clothes drying machine. With two seven-gallon stainless steel pans and float switches, he fashioned a cooker to boil the maple sap he faithfully collected every spring since 1942.
Vic has a been a member and held office in the Indiana National Guard, Plymouth Chamber of Commerce, Rotary Club, Gideon’s International, Teens, Inc. and the Northern Indiana Coin-Op Association.
Vic and Mary Lou were founding members of the Sunrise Chapel which was built on ground provided by George and Minnie Stockman. Vic was an active member, directing the Choir for a number of years and serving on the Board of Directors.
Victor is survived by his devoted spouse Mary Lou and their two children. They are Vickie L. (Ken) Knipp, Colorado Springs, CO., and their children: Tim (Kristi) Knipp, Bellingham, WA., Gabe (Brooke) Knipp, Denver, CO and Janae Knipp a student at Taylor University.
Their son, Wayne A. (Becky) Stockman live in Plymouth. Their three children are: Alan (Eutemia), Greenwood, IN., Kristi (Eric) Kavicky, Memphis, TN. and Katie (Steve) Bare, Plymouth.
Twelve great-grandchildren also survive.
Vic was preceded in death by his parents and a brother, Allen Wayne Stockman.
Visitation with Victor’s family will be held on Friday, March 23rd , from 4 to 7 p.m. in the Johnson-Danielson Funeral Home, 1100 N. Michigan St., Plymouth. Visitation will continue on Saturday morning in the church one hour prior to services.
Funeral services for Victor will be at 11:30 a.m. on Saturday morning, March 24, at the Sunrise Chapel, 11802 Lincoln Highway, Plymouth. The Rev. Mark Allen, pastor of the church, will officiate.
Interment will follow in the Oakhill Cemetery, Plymouth.
Memorial gifts in Victor’s memory may be made to the Sunrise Chapel or Gideon’s International Bible Program.