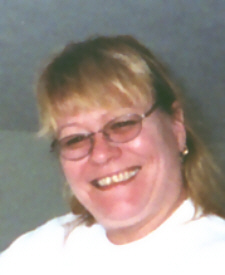 Victoria Lee Meneely, 52, died at 7:45 a.m. on Saturday, April 26, 2008, at her residence, 408 N. First St., Argos, Ind.
Victoria was born in Chicago on August 10, 1955. She was the daughter of Ray and Helen Pauley Phillips On March 27, in Pennsylvania, she was married to James Jeffrey Meneely.
A housewife, she was an avid reader and loved music and playing with her grandchildren.
Victoria is survived by her husband James and by two sons and a daughter. Her sons are Jerry Phillips, Chicago, and Adam (Lisa) Meneely, Plymouth. Her daughter is Heather Meneely, Argos.
Two grandchildren, Koleman Norris, Argos, and Triniti Meneely, Plymouth, also survive together with three sisters and a brother. They are Debbie (Donald) Ritter; Susan (Warren) Howard, all of Chicago, Terri (Cameron) Cambell, Ontario, Canada, and James Phillips, Chicago.
Victoria was preceded in death by her father, Ray Phillips.
Following her wishes their will be no visitation and no funeral services.