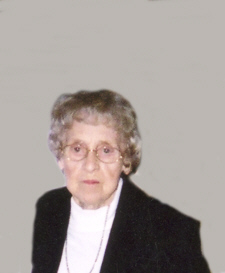 Victoria L. Williams, 86, of 11730 4 A Road, Plymouth, died from a stroke related illness, at 1:15 p.m. on Tuesday, October 18, 2005, in Pilgrim Manor Nursing Home, Plymouth, Ind.
Victoria, a wonderful mother, wife and homemaker, was born on February 19, 1919, in Paintsville, Ky. The daughter of Smith and Chloe Reed Picklesimer, she received her education in Paintsville.
On December 24, 1938, in Paintsville, Victoria and Elmer Williams were married. Elmer died on July 12, 1998.
Victoria enjoyed her grandchildren and their activities very much. She was adept at many crafts and loved tending to her flower gardens.
She is survived by her son and daughter-in-law, John and Carolyn Williams of Plymouth.
Also surviving are six grandchildren and numerous great-grandchildren.
They are: a granddaughter, Jonna and Brent Mabry and children: Jaime, Dylan, Aaron, Kyle, Britany, and Meriah, all of Dallas, Texas.
Grandson John and Tracy Williams and their children: Jonathon, Jordyn and Jacob, all of Plymouth.
Grandson Brett and Linda Williams and their children: Robert and Bailey, all of Plymouth.
Grandson Jeff and Kelly Ruth and their children: Nathan, Deleslie, and Cassidy, all of Elkhart.
Grandson Richard and Jennifer Horner and their children: Zachary, Kaitlyn and Christopher, all of Elkhart.
Grandson Ricky and Victoria Horner and daughter: Nichole all of Las Vegas and grandson John Ruth and his son, Michael of Elkhart.
Two sisters, Emerald Salyer of Paintsville, Kentucky and Maxine Oliver of Franklin Furnace, Ohio also survive her death as well as two sisters-in-law, Mabel Picklesimer of Thornville, Ohio and Pauline Picklesimer of Staffordsville, Kentucky.
Victoria was preceded in death by her parents, her husband, a grandson; Chris Alan Williams, a daughter-in-law; Linda Williams, and two brothers: Leroy and Martin Picklesimer. Two brother-in-laws also have died; Earl Oliver and Ray Salyer.
Friends will be welcomed to celebrate Victoria’s life on Friday, October 21, 2005 from 4 to 8 p.m. in the Johnson-Danielson Funeral Home, 1100 N. Michigan St., Plymouth, Ind.
Funeral services will be held in the funeral home on Saturday, October 22, 2005, at 11 a.m. The Rev Robert Collins will officiate.
Burial will be in New Oakhill Cemetery, Plymouth.
Memorial gifts in Victoria’s memory may be made to a charity of the donor’s choice.