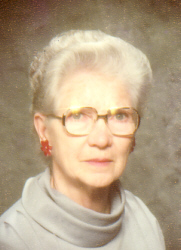 Vida O. Guard, 99, of Bremen, Indiana, died unexpectedly at 10:25 a.m. Sunday, January 29, 2006 in St. Joseph Regional Medical Center, South Bend.
A lifetime Marshall County resident, Vida has lived at her daughter Darlene’s home, 1301 N. Fremont St., South Bend since July of 2005.
Born in Bremen on December 21, 1906, Vida was the daughter of Cassius Ellsworth and Emma Wagner Holderman. She attended Bremen and LaPaz schools.
On February 28, 1932, Vida and Henry E. Guard were married. Henry died in 1985. For years she farmed with her husband, raised live stock, operated the Lake of the Woods Riding Stable and was a former employee of the Plymouth McCord Corporation. They retired from the Riding Stable in 1945 and from Dairy Farming in 1960, yet Vida has maintained the farm to this day. She served many years as a Director of the Diamond X Saddle Club and was a founder of the Frances Slocum Trail Riders Association a passion she continued until the age of 92. Until 1997, she enjoyed working with her daughter, Darlene, in craft shows including Shipshewana for 20 years. She was an accomplished cook, seamstress and enjoyed re-upholstering furniture.
She was active in the Farm Bureau membership club.
Vida was a member of the Shiloh Church in Plymouth and the Missionary Society.
She is survived by her daughter, Darlene Clark, South Bend.
She was preceded in death by her parents, her husband, son-in-law Charles Clark, two brothers; Carl and Wilson Holderman and three sisters, Irene, Edna and Thelma Holderman.
Friends will be welcomed to celebrate Vida’s life and share memories with her family on Thursday, February 2, 2006, from 4 to 8 p.m. in the Johnson-Danielson Funeral Home, 1100 N. Michigan St., Plymouth.
Funeral services for Vida will be on Friday, February, 3, 2006, at 10 a.m. in the Shiloh Wesleyan Church, 10532 4B Road, Plymouth, with calling one hour prior to services. The Rev. John Perkinson, pastor of the church, will officiate.
Burial will be in the Bremen Cemetery, Bremen, Indiana.
Memorial contributions in Vida’s name may be made to the Shiloh Church or to Missionary Press, P.O. Box 120, New Paris, Indiana 46553.