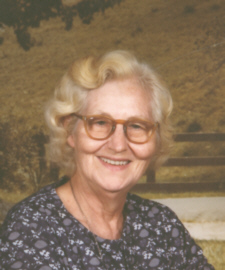 Viola Fern Gross, 90, died at 7:30 a.m. on Sunday, November 25, 2007, at the home of her daughter in South Bend.
The daughter of Howard A. and Mary E. Lambert Snider, Viola was born on February 14, 1917, at Deer Creek, Indiana. A resident of the Plymouth and LaPaz areas most of her life, she had attended West High School.
Viola had worked as an Aide in area Nursing Homes. She liked to keep busy and spent her time crocheting, doing volunteer work at Garden Courts West and for REAL Services. She also enjoyed playing the piano, and had played at the North Salem Church of God for several years and at the Plymouth Moose Lodge, where she was a member of the Women’s auxiliary.
A loving mother, Viola is survived by five daughters, two sons and numerous grandchildren, great-grandchildren and great-great-grandchildren. Her children are: Shirley (Cliff) Bean of Mishawaka; Leroy Gross of Walkerton; Barbara (Harry) Fisher of Plymouth; Janet Boyer of South Bend; Linda Johnson of Phoenix, Arizona; Mary (Jerry) Krick of Plymouth; David Gross of South Bend and Dale (Tammy) Gross of Rochester.
Four sisters and a brother survive as well. They are: Betty Jean Mitch of Ft. Wayne; Joann Dillman of Ohio; Donna Martin of Churbusco; Mildred Books of Plymouth and Manford Snider of Ft. Wayne.
She was preceded in death by her parents, three sons: Rodger, Wilbur and Frank; and two brothers: Donald Snider and Verlie Snider.
Viola’s family invites her friends to come and celebrate her life and share memories with them on Tuesday, November 27, 2007 from 4 to 8 p.m., and after 7 a.m. on Wednesday, November 28th at the Johnson Danielson Funeral Home, 1100 N. Michigan St., Plymouth. A Women of the Moose memorial service will be held at 8 p.m. on Tuesday, in the funeral home.
Funeral services, officiated by Rev. Charles Krieg, will be held at 10:00 a.m. Wednesday in the funeral home.
Interment will be in New Oakhill Cemetery, Plymouth.
Memorial gifts in Viola’s memory may be made to Moose Heart or Hospice.