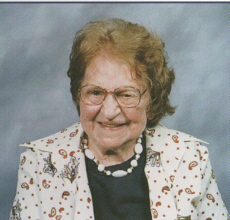 Viola Helen Kruyer, 92, died of natural causes at 2:10 a.m. on Saturday, March 18, 2006, in the Pilgrim Manor Nursing facility, 222 Parkview Drive, Plymouth.
Viola was born on May 11, 1913, the daughter of John E. and Frances Grosh Harley.
She lived in the Marshall County area most of her life, attending Argos High School and graduating with the class of 1931.
On September 14, 1940, in Rensselaer, Indiana, Viola and Robert Joseph Kruyer were married. Robert was a farmer and worked at Studebaker. He was employed at Young Door in Plymouth when he died in 1975.
Both Viola and Robert were very active in Farm Bureau Incorporated. Viola was once the County Woman Leader for the Farm Bureau.
Viola was supervisor for Dutchmaid Clothing for over 28 years. She was a member of the Wildness Home Ec.Club for over 50 years and loved to go to Farm Bureau National Conventions. She was an avid fan of Plymouth and Notre Dame Basketball. Viola enjoyed Southern Gospel Music.
She was a member of the Trinity United Methodist Church.
Viola is survived by a son, John R. and Nancy Kruyer of Argos, Indiana and a daughter Helen A. H Heiniger of Kouts, Indiana.
Two sisters, Leona Gridley, Plymouth and Hazel and Carl Heiser of Bridgeman, Michigan also survive, together with three grandsons and a granddaughter.
They are: Jim Kruyer, Plymouth; Krista Kruyer, Matthew Kruyer and Adam Kruyer, all of Argos and Sabrena Heiniger of Kouts, Indiana.
Four great-grandchildren survive as well.
Viola was preceded in death by her parents, her husband and a sister, Loretta Nifong.
Friends will be welcomed to celebrate the life of Viola Kruyer from 4 to 7 pm Tuesday March 21, 2006 in the Johnson-Danielson Funeral Home, 1100 N. Michigan St., Plymouth, Indiana
Funeral services for Viola will be held at 7:00 pm on Tuesday March 21, 2006 in the Johnson-Danielson Funeral Home with Rev. William Kaster of the Trinity United Methodist Church officiating.
Burial will be in Oakhill Cemetery, Plymouth, Indiana
Memorial gifts in Viola’s memory may be given to her church.