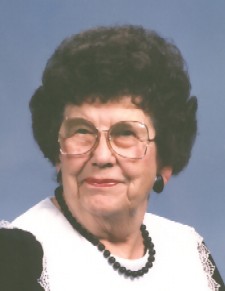 Violet Ham, 93, died at 9:55 AM, Thursday February 28, 2008, in Pilgrim Manor, Plymouth.
She was born in Bourbon, IN on May 16, 1914 to the late Charles and Villa Fern Nellans Ferguson. Violet attended Bourbon schools.
On June 16, 1932 she married Robert “Bob” Ham in Plymouth, IN.; he died September 4, 1973. They had three daughters Margaret “Peggy”, Carolyn, and Sonia. Together Bob and Violet owned Courtesy Cleaners from January 1951 to August 1972.
Violet was a member of the Presbyterian Church in Plymouth, and the Beta Sigma Phi for many years and held numerous offices in the sorority. She is survived by two of her daughters and their husbands Margaret “Peggy” (Max) Hatfield, and Sonia (James) Kadlec all of Plymouth, IN; 10 Grandchildren, many Great Grandchildren, many Great Great Grandchildren, four brothers Clifford (Barbara) Ferguson, Donald (Avalee) Ferguson, and Floyd (Carol) Ferguson all of Plymouth, IN; Lloyd (Linda) Ferguson, New Albany, IN; one sister Marjorie (Glenden) Albright, Plymouth, IN; and three sister-in-law’s Dorothy Ferguson, Argos, IN; Lena Ferguson, Niles, MI; and Lizzie Moore, Plymouth, IN.
Violet was preceded in death by her husband, parents, daughter Carolyn Elliot, two brothers Robert Ferguson, Melvin Ferguson; and two sisters Bernice (Walter) Ott and Donna Ferguson.
Friends are invited to celebrate the life and share memories with her family from 4 to 8 p.m. on Tuesday, March 4, 2008, and after 7 a.m. on Wednesday March 5, 2008, at the Johnson-Danielson Funeral Home, 1100 N. Michigan St., Plymouth.
Funeral services for Violet will be held at 10:30 a.m. on Wednesday, March 5, 2008, in the funeral home, the Rev. James Campbell will officiate.
Burial will be in Oakhill Cemetery, Plymouth.
In lieu of flowers memorial contributions may be given to the Presbyterian Church, or to the donor’s choice.