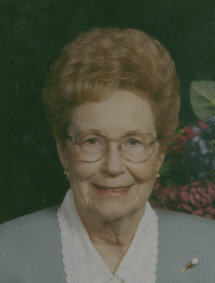 Violet I. “Rusty” Mentel, 83, of 805 Baker St., Plymouth, died from complications from surgery in Rush University Medical Center, Chicago, Ill., at 12:30 p.m. on Sunday, October 9, 2005.
Rusty was known throughout Marshall County as an Avon Lady. Devoted to physical fitness, up until her death, she exercised three days a week at the Holm Fitness Forum. Born in South Bend on March 10, 1922, Rusty was the daughter of Carl Stoneburner and Josephine Campbel Stoneburner She lived most of her life and attended schools in Tyner, Ind., graduating from Tyner High School. She then went to a Fort Wayne beauty school and was employed at Babe’s Beauty Salon until 1942 when she moved to California to visit her brother.
She ended up falling in love with John Mentel, a dashing member of the United States Marine Corps. On February 2, 1945, in Santa Barbara, Calif., Rusty and John were married. They lived in California from 1944 to 1947. They then moved to South Bend and lived there until 1972 before settling on 4B Road in Plymouth.
She retired from the beauty business when the children began to come.
Their last move together was to River Park in 1995. The couple had wintered together for 20 years at Daytona Beach, Fla.
Besides selling Avon products, Rusty worked part time in the ladies shoe department at Treat’s for Her.
She was known as a great cook and had been a leader in Boys Scouts, Campfire Girls and Indiana Guides.
In South Bend, Rusty had belonged to the Peoples Church and in Plymouth, she was a member of the Plymouth Wesleyan Church.
Rusty is survived by four children: two sons and two daughters. Her sons are James and Susan Mentel, St. Louis, Mo., Richard and Chris Mentel, Mishawaka, Ind.; and Her daughters are: Kathy Arsenault, East Dundee, Ill.; and Barbara and John Huffman, Plymouth. She is also survived by 13 grandchildren and 17 great grandchildren.
A sister-in-law, Lorene Stoneburner, New Carlisle and a brother-in-law and sister-in-law, Bob and Dorothy Brown, Lavonia,Mich., also survive.
She was preceded in death by her parents, her husband, John, and a brother, Harry Stoneburner.
Friends will be welcomed by Rusty’s family at the Johnson-Danielson Funeral Home, 1110 N. Michigan St., Plymouth, from 4 to 8:30 p.m. on Wednesday, October 12, 2005.
There will also be calling for one hour prior to services on Thursday, October 13, 2005. Services will be held at 10:00 am at the Plymouth Wesleyan Church, 11203 S. Michigan St. Oliver Dongell, pastor of the church will officiate at the funeral services.
Burial will be in the Tyner Cemetery, in Tyner, Ind. Memorial gifts in Rusty memory may be made to the Center for Hospice and Palliative Care. Marshall County Chapter.