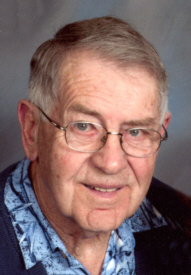 Virgil D. â€œMooseâ€ McCan, 86 and lifetime Plymouth resident, passed away at 7:10 a.m. on Wednesday February 22, 2017 at the Center for Hospice in South Bend.
Born on February 28, 1930 in Plymouth, Moose was the son of Arthur and Pauline (Buckingham) McCan. He graduated from Plymouth High School. While in high school, he set a pole vault record in track and field, which he held for over 15 years.
On October 19, 1952, Moose married the love of his life, Joanna B. Snyder in Culver, Indiana.
A talented craftsman, Moose was a self-employed carpenter, and also worked at the Plymouth Lumber Yard. For the last 12 years before retirement, he worked as a Custodian at LaVille High School in Lakeville.
He loved woodworking projects and after collecting walnuts all year, Moose would cut them and make crafts. He enjoyed brain teasers and doing puzzles, and camping trips to Weko Beach with this family.
Joanna and Moose were members of the Plymouth Church of the Brethren, where he again offered his skills on woodworking projects in the church. He was also an Eagles Lodge Member.
Moose is survived by his loving wife of 64 years, Joanna of Plymouth, and their four children: Jenny S. Huffman of Plymouth and children Jeff and Kevin, Tim N. (Cindy) McCan of Lakeville and children Dustin, Amber and Kelli, Scott A. (Karrie) McCan of Carmel and children Chris and Allie, IN and Julie A. (Dan) DeMers of Seattle, WA and Kyli and Wyatt; 12 great-grandchildren and a brother, Roger (Arlene) McCan of Plymouth.
He was preceded in death by his parents and brother, Jerry McCan.
Visitation will be held on Sunday February 26, 2017 from 3-6 p.m. in the Johnson-Danielson Funeral Home, 1100 N. Michigan Street, Plymouth.
Funeral services will be held at 11 a.m. on Monday, February 27, 2017 in the Plymouth Church of the Brethren 1130 N. Michigan Street, Plymouth with Pastor Tom Anders officiating.
Graveside services will follow in the New Oak Hill Cemetery.