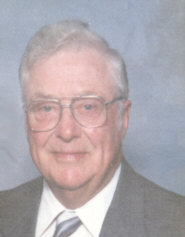 Virgil W. Quivey, 9102 Quince Road, Plymouth, died of natural causes in Pilgrim Manor Nursing Home at 1:15 p.m. on Friday, April 23, 2004. He was 86 years old.
A lifetime Marshall County resident, Virgil was born the son of Clarence and Nellie Irwin Quivey on March 23, 1918. He graduated from Culver High School with the class of 1936.
On December 1, 1940, in Plymouth, Virgil and Frances L. Dawson were married. Frances survives his death.
A farmer and outdoorsman his entire life, he was also a bus driver for the Plymouth Community Schools. A member of the Christian Fellowship Class of the First United Methodist Church, he had also served on the church Board of Trustees.
In addition to his wife, Virgil is survived by a daughter and son-in-law, Joan and Robert Matejka, living in North Carolina.
Two grandsons and their spouses also survive. They are: Jon and Chimene Speer, Plymouth, and Jeff and Theresa Speer, South Bend; and three granddaughters: Julie Speer, South Carolina; Lisa Hallenbeck and Marcie Matejka, both in North Carolina.
Great-grandsons Wesley, Jacob, Andrew Speer, all of Plymouth, and a brother, Hugh Quivey, also of Plymouth, survive as well.
Virgil was preceded in death by his parents and two daughters: Karen Quivey and Janet Speer. Three brothers and a sister have also died. They are Albert, Ronald and Glen Quivey and Mary Alice Lannon.
Friends may visit with the family to celebrate Virgil’s life from 3 to 7 p.m. on Monday, April 26, 2004, in the Johnson-Danielson Funeral Home, 1100 N. Michigan St., Plymouth.
Funeral services will be held in the funeral home at 11 a.m., Tuesday, April 27, 2004. The Rev. Dr. Dean Fager, pastor of the First United Methodist Church, where Virgil was a member, will officiate.
Interment will be in New Oakhill Cemetery, Plymouth.
The family requests that memorial gifts be made to the First United Methodist Church’s Music Fund, or the charity of the donor’s choice.