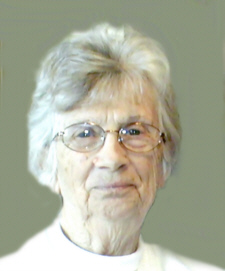 Virginia M. Abair, 82, of 10309 8A Road, Plymouth, IN, died at 2:33 a.m. on Monday, April 6, 2009, at home, surrounded by her family after a brief illness.
Born on September 8, 1926 in Plymouth, Virginia was the daughter of Harrison Russell and Lucile Marie (Price) Harner.
She had attended the Old Muncie School at Bremen, and other various schools in Marshall County.
On May 13, 1944, in Argos, IN, she married her loving lifelong companion, Chester Leroy Abair. Together they had five sons and two daughters. Chester preceded her in death on January 19, 1999.
Virginia, whose favorite motto was “One day at a time, sweet Jesus”, was a homemaker and a master of all trades. She loved to fish and camp in Southern Indiana and Wisconsin. A lady who never had idle hands, she enjoyed all kinds of crafts, including: crocheting, knitting, sewing, quilting, cooking, working in her garden and canning the fruits of her labor.
She was a member of the Plymouth Wesleyan Church for over 40 years, where she enjoyed putting up decorations at Christmas time.
Virginia’s proudest achievement was the raising of her and Chester’s children: DeVere (Judy) Abair of Plymouth, Judith (Steve) Hessler of Richland, IN, Garry (Barbara) Abair of Newnan, GA, Alan Abair of Plymouth, Roger Abair of Wedowee, AL and Jacqueline (Les) Trump of Plymouth.
She is also survived by 19 grandchildren, 31 great-grandchildren, and her family is still growing. Two sisters: Viola Capron and Phyllis (Michael) Corbridge, both of Bremen and a brother, Russell L. Harner of Bremen.
Virginia was preceded in death by her parents, her beloved husband, a son: Larry
Abair, three brothers: Robert, John and William Harner and a sister: Evelyn Litchfield.
Friends may pay their respects at the Johnson-Danielson Funeral Home, 1100 N. Michigan St., Plymouth, from 3 to 8 p.m. on Wednesday, April 8, 2009.
Funeral services will take place at the funeral home on Thursday, April 9, 2009 at 11:00 a.m., with the Rev. John Perkinson, pastor of the Shiloh Wesleyan Church, officiating.
Burial will be in New Oakhill Cemetery, Plymouth.
Preferred memorial contributions may be made to the Center for Hospice and Palliative Care.