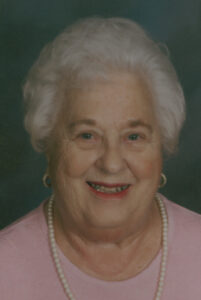 Virginia Aker, 86, of Plymouth died Wednesday January 20, 2010.
Virginia was born in Plymouth, on November 22, 1923. She was the daughter of Ora and Helen Mowiser Burroughs. She attended Plymouth schools and earned her master’s degree from IUSB in Education.
She worked as a receptionist for Dr. Vore for 11 years and was a teacher in the Penn-Harris-Madison school system for 13 years.
On August 21, 1945, in Missoula, Montana, she and Dale F. Aker were married. Dale died on September 13, 1988.
After having lived in Mishawaka for a time, she returned to Plymouth in 1994.
Virginia enjoyed spending time with her grandchildren, they were her world, she also collected antiques, and was an avid reader.
She was a member of the Church of the Brethren in Plymouth, the ISTA and NEA.
Virginia is survived by a daughter, Patti (Charles) Hoppers, Mishawaka, and three grandsons: Kevin (Michele) Hoppers with son Noah of Osceola, IN; Daniel Hoppers with children Nicholas and Isaiah of Mishawaka; and Joel with son Brayden of LasVegas, NV.
A brother, John Burroughs, Angola, a sister, Phyllis (Dewey) Shearer, Ft. Wayne, and a sister-in-laws, Elaine Burroughs of Plymouth, and Mary Aker of SouthBend, along with several nieces and nephews survive as well.
She was preceded in death by her husband, parents, Kathleen, a daughter, and sons, Randall Dale and Gregory Allen. Albert Burroughs, a brother, Jan Burroughs a sister-in-law has also died.
Friends are invited to visit with Virginia’s family from 4 to 8 pm on Monday, January 25, 2010, at the Johnson-Danielson Funeral Home, 1100 N. Michigan St., Plymouth. Funeral services for Virginia will be at 11:00 am, Tuesday, January 26, 2010, in the Plymouth Church of the Brethren on the corner of Baker and Michigan Streets, next to the funeral home.
Memorial contributions in Virginia’s memory may be made to The Center for Hospice and Palliative Care, Inc. 112 Center Street Suite C, Plymouth, IN 46563 or Jerry Lewis and the MDA PO Box 78960 Phoenix, AZ 85062-8960.
Burial will be in the New Oakhill Cemetery.