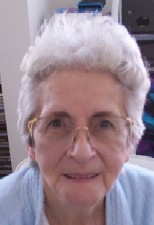 Virginia P. Burger, 81, died of natural causes at her residence, 468 W. Marshall St., Argos, on Sunday, August 23, 2009, at 3:20 p.m. where she has resided for the past two years.
Virginia was born in Cleveland, OH., the daughter of Ray Guyette and Elsie Y. Payne, on May 21, 1928. She graduated from Peabody High School in Pittsburg, PA., with the class of 1947.
On October 2, 1954, in the Airforce base chapel in Coraopolis, PA., Virginia and Ronald James Burger were married. Her husband died on April 22, 2007.
Virginia worked as an Executive Secretary in Medical Records for Mercy Hospital and St. Anthony Hospital in Crown Point. She also worked part time for Memorial Hospital, South Bend. She and her husband were co-owners of Shady Lane Campgrounds from 1982-1990.
Virginia loved camping and traveling and always took along her little Jack Russell dog, Nikki.
She was a member of the Unity Church, Colfax Ave, South Bend, and the American Legion Auxiliary. Virginia is survived by a daughter and two sons. Her daughter is Virginia (Art) Moore, Dallas, GA., and her sons are James R. (Judith) Burger and John R. (Karen) Burger, all of Plymouth.
Four grandchildren survive as well. They are Virginia’s Leon Mullenix and son Hayden and Julie Barfield and son Hunter. John’s children are Katelyn Burger and Jeremy Camper with children; Alexis, Erik and Cameron. Five great grandchildren also survive.
A brother-in-law and sister-in-law, Carl and Betty Burger in Yukon, OK also survive. Virginia was preceded in death by her husband.
Family services will be held at the Peaceful Meadows Cemetery in Dallas, GA.
The Johnson-Danielson Funeral Home, 1100 N. Michigan St., is in charge of arrangements.
Memorial gifts in Virginia’s memory may be made to the Marshall County or any Humane Society.